The St.Louis Post-Dispatch has an editorial cartoon today showing “Incumbent Stadium,” a clever drawing of how a baseball diamond would look if it were drawn by the state legislators spearheading the congressional redistricting effort. R.J. Matson’s cartoon shows a baseball diamond that resembles a Picasso painting of Mickey Mouse–two big ears with a wandering first base line that puts the right eye out in foul territory.

The state legislators who created what we call the “dead lizard” map because of the convoluted proposed fifth district in western Missouri were so focused on divvying up St. Charles and Jefferson Counties last Thursday and Friday that they exhausted everybody at the capitol, including themselves before giving up early Friday morning. This, generally, is what that competition between the House and Senate redistricting chairmen left behind Friday morning. 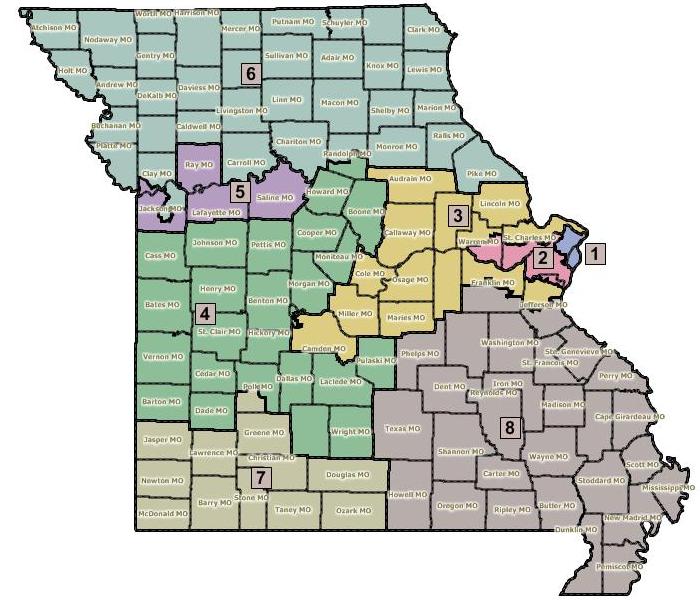 But what if the politicians and all of their vested interests were taken out of the mix? What if somebody wanted to draw districts that are simple, clean, and uncomplicated?

Enter Nathaniel Persily, a professor at the Columbia University Law School. The newspaper notes he’s been called upon by courts to draw congressional districts when lawmakers fumble the job (and so far in Missouri we’d have to think that the ball is on the ground and the question is whether anybody can pick it up and finish the play). He has a couple of maps that kill the lizard and seem to be clean and simple.

Kansas City and Jackson County would become the 7th district, not the 5th, but would not be attached to the three rural counties the legisaltive proposals call for. This one splits a couple of counties in southwest Missouri and takes chunks out of Cooper and Cole Counties.

Here’s an alternative from Prof. Persily:

The biggest thing we notice in this one is that the new fifth district would occupy a lower tier of counties, splitting Howell County in the south and maintaining the bite out of Cooper County..No dead lizard in this one either.

The goal is to have a zero standard deviation. The legislature’s redistricting chairmen claim their maps have equal populations in seven districts while the other district is one person short. Persily’s maps have more districts that fluctuate plus or minus one person.

One big difference in his maps from the legislators’ maps: His lines have not been drawn, so far as we know, on the basis of whether incumbents do or don’t like them.

The legislative redistricting leaders have insisted that this entire process is nothing more than a math exercise. Prof. Persily seems to adopt the same attitude. The difference is that our members of congress have not gone to Columbia University to advise him on how to do the math.

If the ball stays on the ground at the capitol, these maps give us an idea of what we might get if the court system has to pick up that ball and run with it.