Bike Day at the Capitol was Monday; sponsored by the Missouri Bicycle and Pedestrian Federation, it was a day for Missouri cyclists to petition their legislators for safer and more bike-friendly roads throughout the state, and to make them aware of cycling as part of a healthier lifestyle.

The main event was a ride on the new cycling and pedestrian access across the Missouri River to the Katy Trail—a joint effort between The state transportation department, the state parks division, the city of Jefferson City, and several other groups. Bikes were parked in the third floor rotunda and some legislators carried bikes through the halls and past the artwork of Jefferson City’s most famous landmark on their way outside for the afternoon’s ride. Students from a Columbia middle school, dressed in their best, handed out pamphlets to anyone who looked in the least official.

Why was this so important to me, a part-time, pinch-hit reporter/anchor for the Missourinet? Why did I beg my news director and managing editor to let me cover this? 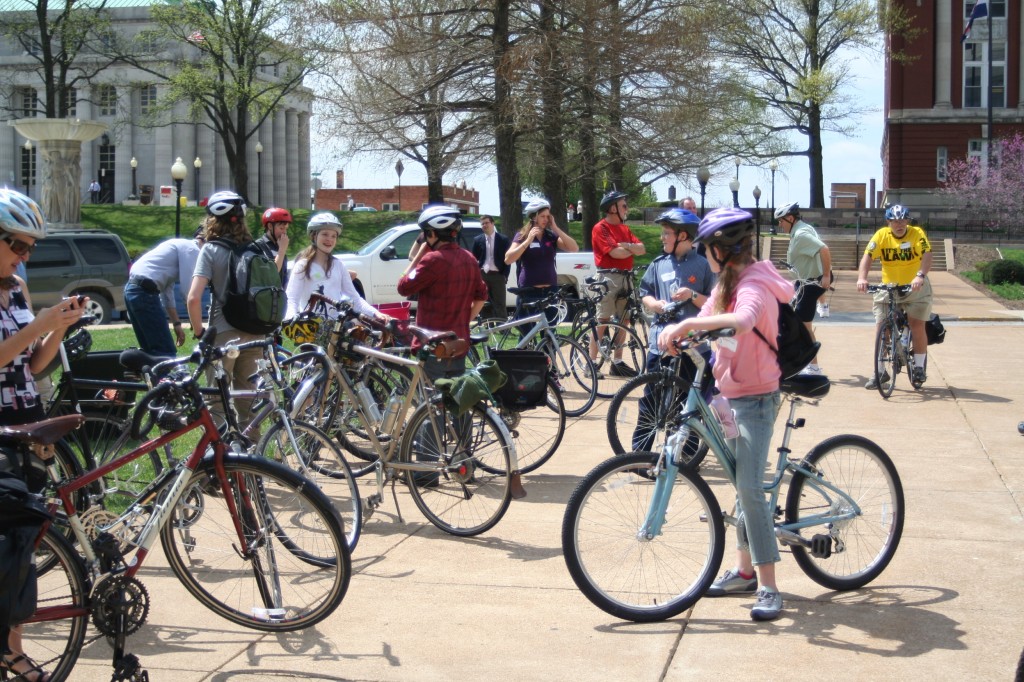 Because I’m really proud of those Columbia kids, one of whom is mine. They’re part of the Bike Brigade, and the woman who got the grant and pulled the group together, Gina Overshiner, received an award for her work in biking to school with kids every day, rain or shine. She educated the students in proper city riding, correct signaling, and other safety issues. Not only do they ride well in Columbia, but they rode safely, carefully, and courteously on the 6-mile round-trip of the Legislators’ Ride. 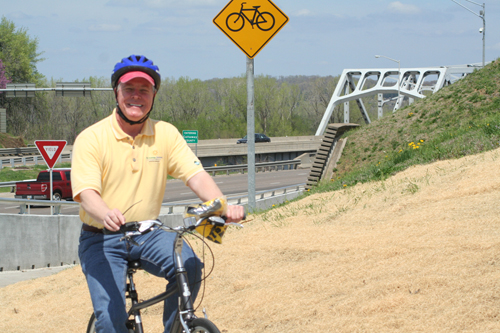 As I listened to speeches by various individuals, and looked around at all the public officials—including the Lieutenant Governor—ready to ride, I kind of wished I had a bike with me; what a great day!! But it’s extremely hard to record sound and shoot pictures on a bike, so I returned to my car and drove down to the access to photograph the riders. Then I realized something.

The access is not an attractive architectural addition to this fair city.

It’s rather prison-like [PHOTO]. It encloses the riders and pedestrians in chain-link fencing as they make their way across the river, next to the vehicular bridge, which is separated from them by a massive concrete barrier. It makes the bridge look almost…attractive! Granted, it does the job it’s supposed to do– getting everyone safely from point A to point B–but with all the money spent, maybe someone could have worked a bit of aesthetic in there?

Ah well….it was a sunny day, legislators, staffers and officials ran away to play for a few hours before buckling down to business again, and a good time was had by all. 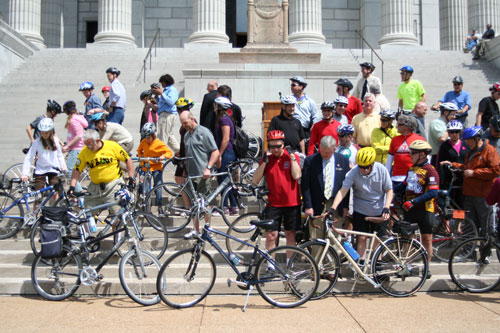 Get on your bikes and ride!