It occurs to us after years and years of covering state government that there are hundreds of little things we have overlooked as we have covered the big events and major personalities of our times. Sometimes something happens that sets the mind off on a spirited dash of observation about some of the smaller things. Such is the case with the news advisory we received late yesterday.

The most overlooked, underappreciated, unacknowledged essential part of state government is the desk. Desks appear in various guises. Some people prefer desks that are actually tables. Some prefer the old-timey desks that still have slide-out panels to write on. Some prefer heavy, impressive, ornate desks that symbolize status. Some desks are sections of cubicles. Without desks, state government itself could not exist. 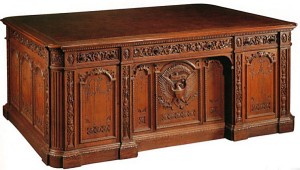 But one desk seems to be neglected these days. It seems, as we read news releases day in and day out that it is seldom used. Its occupant seems almost never to be behind it. Some people just aren’t cut out for desk duty. For some people a desk is almost like a prison. They have to break out, get away, be active. They don’t mean to disrespect their desk. They just have to do what’s right for them.

But when a desk is only furniture, it does not live.

An unused desk is a slight to those who carefully made it.

An unused desk is a taxpayer-financed resource that is going to waste.

A few desks become museum pieces, retired in quiet honor to a place of glory because of the person who used them or the momentous decisions that were made on them or around them.

Then there’s the desk in the Governor’s office.

He’s away from it again today. A few days ago, the governor decided the state fair people were no longer capable of announcing who would be performing in the grandstand shows this year. Off he went, away from his desk, to Sedalia to announce that Lynrd Skynrd and the Doobie Brothers would be performing. What momentous event has left this most important desk in state government unoccupied today? Again?

He’s in St. Louis. And what IS that event that is so important he must fly away again from the Capitol? Here’s the headline from yesterday’s advisory to reporters:

Gardens. He’s gone to St. Louis to start a program that encourages people to plant gardens.

In 1917, the governor encouraged Missourians to plant gardens by actually starting a garden AT THE GOVERNOR’S MANSION. The first family even demonstrated the use of a hoe.

It must be a sign of the changing times. In 1917 the governor (would you believe his name was Gardner?) encouraged people to plant gardens because it was the patriotic thing to do to support our troops in World War I.

Today the governor is encouraging Missourians to plant gardens by going to a combination café/garden center in the upscale St. Louis Central West End. While he’s there he’s going to announce details of how Missourians can register their gardens online in the 10,000 Gardens Challenge.

He’ll also talk about how folks can get helpful gardening information and become eligible for prizes.

University of Missouri Extension has provided “helpful gardening information” for decades, in case you haven’t noticed. But as far as we know, Extension doesn’t make it a competitive event of some kind that awards prizes.

Gardening is important. In many places, especially in metropolitan areas, food gardening isn’t high on the recreational agenda. Flower gardening is pretty popular. But planting peas and beans and squash and corn and potatoes and cucumbers has fallen from the public consciousness to a large degree. Once it was an important part of many, many family homes. That was back in the days before people thought those things grew in the frozen food section at the grocery store.

Governors throughout Missouri history have put the weight of their offices behind a lot of important events and initiatives, as well they should. Governors, including Governor Nixon, rightfully go places that bring publicity’s spotlight to worthwhile causes and issues.

Some legislators who are not of his party have been questioning the costs of his being away from his desk so often and we no doubt will be hearing and seeing commercials in next year’s campaign about the cost to the of the governor’s travels and which agency is paying for them.

The governor is an upscale part of St. Louis encouraging Missourians to rediscover the joys of getting their hands dirty by growing some of their own food today while his desk sits quietly in front of the big windows of his office, alone and quiet. Again.

Sometimes it’s tough to be a desk.