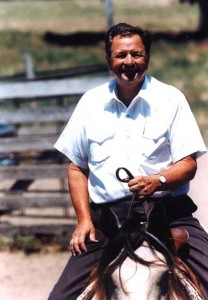 He used to joke about things that would have to wait for “Bury Derry Day.” Sadly, that day is coming this week. My friend Derry Brownfield died overnight. He was 79.

Derry was a friend for more than forty years. He was the farm director at a radio station in Jefferson City where I went to work in 1967. He did the farm news and market reports from 6-7 a.m. and the farm programs during the noon hours in the days when it was assumed that farmers got up early, listened to the radio in the mornings and then headed for the fields, then tuned in again when they went back to the house for lunch. He also used to do the 7:15 a.m. weather program, just before I did the 7:20 sports. Derry, who had horses on his farm and loved to ride them, once told me he lived in fear of mis-speaking during that weather program and telling the audience that a warm air mass was a warm mare’s ass. His vigilance paid off. He never said it.

He talked the talk the farmers talk, knew the issues farmers knew—because he was a farmer, himself. Still was. He’d been out working with his cattle yesterday. I’m not sure life was ever better for Derry than when he was on his horse among the cattle, or when he was sitting on the porch of the cabin he built ‘way back on his property, telling stories or sharing his views of the world.

Derry was never bashful about sharing his views of the world, as listeners of his “Common Sense Coalition” radio program have known for twenty years or so. And if you didn’t care for his opinions, that didn’t keep you from being his friend.

In the early 70s, I hired a young fellow named Clyde Lear as my assistant news director at the radio station. Clyde and Derry became fast friends and in 1972 found the financial backing they needed to form a state farm broadcasting network. Clyde has written about those early days on his own blog. With Derry as the centerpiece, they built what later became the Brownfield Network into the nation’s largest farm broadcasting network. Two years after they went on the air with nine stations carrying Derry’s broadcasts they decided to set up a news network and asked me to join them in creating what is now the Missourinet. Because they had built a farm network that had become known for the quality and the value of its programs, the Missourinet went on the air with more than thirty affiliates, most of them also affiliates of the farm network.

Even after Derry left the day to day program responsibilities, he continued to do a daily commentary show. Ultimately that led to his daily hour-long talk show that he billed as “the radio talk show with a country flavor” and a dose of common sense.

Derry was probably to the right of the Tea Party movement. But he was among the most liberal people you could ever meet when it came to friendship. Laughter and warmth came easily to Derry. You were never a stranger very long with him. He could give a speech at a moment’s notice although quite often he drove for several hours to talk to an audience. Derry was not much on flying. He’d rather drive his Cadillac (one of the big long ones) to North or South Dakota than fly.

All of these high tech gadgets we’ve gotten in broadcasting weren’t for Derry. In fact he had an old-fashioned round analog clock with a sweep second hand installed in his studio because, he said, he couldn’t figure out how to hit his commercial breaks with one of those digital things.

When I first went to work for what later became Learfield (Clyde Lear and Derry Brownfield) Communications, Derry was in Rome for the World Food Conference. I did the farm news on the farm network in Derry’s place while he was in Rome (somebody else did the markets because I didn’t have the slightest idea what a pork belly was and why knowing it was significant). Derry refused to take a tape recorder with him. He thought it was better to just call back and tell us that he had sat right behind the United States Secretary of Agriculture and other dignitaries during the conference than it was to record an interview with him. That was Derry. Independent, contrary, opinionated, entertaining, and committed to telling people about agriculture in his own way.

He didn’t need all this high-falutin’ stuff to tell people about farming. He talked the language and he did the talking and that’s how it always was.

A few years back our web guy put together a video that (almost) captures the uniqueness of Derry Brownfield, I think, a man who took great joy in living and farming and broadcasting.

Now he’s gone. I’ll remember the laughter and the spirit and the fun of knowing somebody who was unapologetic about being his own man.

All of us who have friends like Derry are richer because of that friendship.

UPDATE:  For those unable to attend Derry’s funeral, Bob’s recollections.