A big crowd filled the rotunda of the capitol Saturday night to commemorate the centennial of the fire that burned the state capitol and made it possible for the present magnificent structure. Firefighters from several communities were part of the observance. Fire trucks and fire department vehicles circled the capitol with their lights flashing and horns blaring. Extra-bright lights were shone on the capitol as a way to emphasize how bright the fire had been in the old one in 1911 when people 20 miles away and more saw it as a glow against the dark night sky, if nothing else. 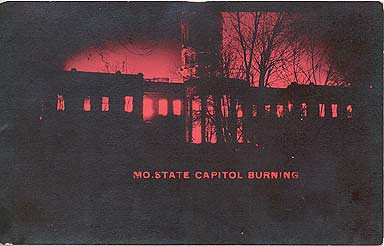 A speaker at the event Saturday night called the 1911 fire “the best thing that ever happened to Jefferson City,” noting that Jefferson City’s status as the permanent seat of government had been under question for decades because of the inadequacy of the capitol, lack of hotel rooms, high prices, and even lack of a modern fire department. A statewide vote in 1896 had determined the seat of government would not shift to Sedalia. Voters had rejected bond issues in 1904 and 1910 to build new capitols in Jefferson City. There already was talk in 1911 of building a new capitol in St. Louis.

After the fire, two proposals were referred to voters. One, needing two-thirds approval, would leave the capitol in Jefferson City. If that failed, voters would decide on a bigger bond issue in 1912 that left the location wide open.

West Plains entrepreneur Jay L. Torrey wanted the capital city moved to his large farm near West Plains. He knew that he only had to have one-third of the voters say “no” to the August bond issue and campaigned vigorously for the defeat (the bond issues of 1904 and 1910 had gotten only 31 and 26 percent support). But Missourians on August 1, 1911 went for the bond issue by about 75%.

The first legislative session to meet in the building was 1919. The building was dedicated in 1924, and only then was Jefferson City able to live with no lingering doubts that the seat of government would be moved.

Missouri’s capitol is now 90-plus years old. It retains its classic beauty and is considered one of the nation’s finest. But it is showing signs of neglect with significant basement problems, cracking and crumbling steps, art work in need of restoration, and other problems. It will cost millions of dollars to repair and restore our capitol. Few legislators who work in the building seen to notice and if they do, few seem to care.

As we commemorate the fire that destroyed one capitol, who will speak for the great building that replaced it?