The front door at Camp Missourinet will only open a little ways this morning because of the big snow drift in front of it. If you can get through it, you’re a thinner man than I, Gunga Din. Why you’d want to go through it, I don’t know.

We have enjoyed telling people it is colder than Hell in most of Missouri this morning. At 7:25 a.m, the temperature was 19 in Hell, Michigan.

Snow bragging rights after the blizzard appear to go to Camdenton with 21 inches, an inch more than Hannibal. Of course, it’s probably deeper in the back yards of a lot of Missourians. And as time goes by and we tell the story of this blizzard, the snowfall will become amazingly deeper. The Blizzard of the Century. So far. [Photo by Missourinet Sports Director, Bill Pollock. More here.] 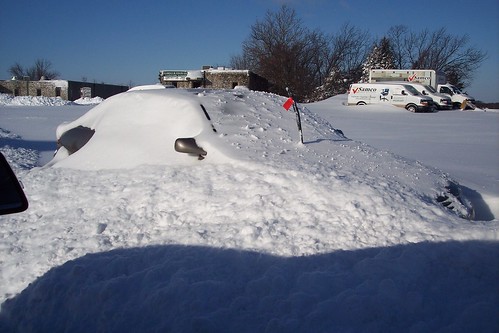 Wouldn’t you think the owners of this company could afford to have at least one full-length couch in their offices? The news department was able to sneak the purchase of one past the bosses when we outfitted our Capitol office a long time ago but the Capitol is about six miserable miles from our main studios and about 11 p.m. yesterday we were not about to go to the capitol to use it. Couldn’t get through the front door of our office anyway. Our car is in the lot somewhere. Couldn’t get into it anyway because of the drift. Couldn’t go anywhere even if we did.

A sleeping bag on the carpeted concrete floor of the big boss’s office is not conducive to the highest degree of rest—although it does allow us to play the “news martyr” role. Too bad few people will be in the office today to say sympathetic words.
The big boss’s recliner that he uses for his afternoon naps is okay for naps. Not worth a hoot for four or five hours of sleep. Couches. Couches. Couches. We need couches.

Or some army cots we can haul out of the closets for times like this.

Sports director Bill Pollock occupied the love seat in boss number two’s office. We say “occupied” because “slept” doesn’t quite cover trying to get comfortable in a love seat. Randy the engineer came in about 11 last night and probably has his head down on his desk downstairs. Farm broadcaster John Perkins hasn’t emerged from his part of the floor in the Farm Director’s office.
Couches!!!!

We had a guy in a pickup truck with a blade on the front shoveling our parking lot all day yesterday. Biggest problem was where to put it as it kept piling up. We’re thinking of starting an office pool, having people guess the day and time when the last bit of this snow melts. We’re thinking it will probably be March.

The legislature called things to a halt yesterday. A lot of lawmakers are still in Jefferson City because they can’t get home. But they stopped things because the legislative staff had trouble getting to work. There also were legitimate concerns about the safety of staff members trying to get to work and get home.

We don’t remember the legislature ever stopping work midway through the week because of the weather although we do remember at least one time when the work week was delayed by a day because of heavy snow. We recall Mel Carnahan moving his inauguration indoors because of the bad weather. And we will never forget the Teasdale “Freezedale” inauguration in 1977 that should have been held indoors after a foot of snow the night before, but wasn’t.

Throughout Missouri this morning, local radio stations are telling people how bad things are or what they missed and what the road conditions are and what schools are closed. A lot of them slept on floors or desks or in chairs overnight, too. And as much as we might complain about wanting COUCHES (have we mentioned that?), at least we weren’t in the cab of a road grader or in a salt truck trying to open, reopen, or keep open Missouri’s roads overnight. Those people, the police officers, the emergency medical folks—they’re life-savers. And when we do get to leave this place and go home sometime today or tomorrow, we’ll get there because of the exhausting and often dangerous work they have done.

Kind of makes complaining about sleeping on the boss’s floor petty, doesn’t it?