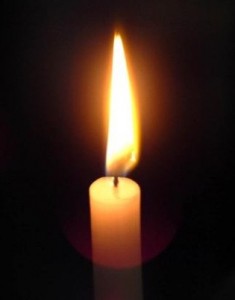 Years and years ago there used to be a weekly inspirational television show sponsored by the Christopher Society that concluded with the motto: “It is better to light one candle than curse the darkness.”

I parked my car in the driveway less than six feet from the street. I still had to shovel snow to get to the street, which was no picnic, either. In the darkness, with snow blowing up my sleeves and down my neck as I shoveled the six feet between my car in the driveway and the street, I found a certain therapeutic value in cursing the darkness. And the cold. And the snow. Light a candle? It would have blown out immediately.

Such are the penalties paid by those who go to work at 4 or 5 a.m.

But lest we get submerged in our own frigid self-pity on days like these, let us think of the men and the women who have spent all of those overnight hours working to keep our roads and streets at least passable. They had spent the whole night trying to see through the snow, battling lights reflecting back to them from the snow that was falling, blowing, and flying from their blades. So we tip a snow-covered hat to those folks.

Did anyone else notice the interesting juxtaposition of information last night in the Governor’s State of the State address and the Lt. Governor’s Republican response? Governor Nixon talked about saving 3,750 jobs at the Claycomo plant and other job growth in the last year. Lt. Governor Kinder said the governor had been ineffective in job creation and talked about the governor spending a day at the state fair instead of courting a company considering more than 1,000 jobs in the Kansas City area. Perhaps we saw a preview of the 2012 campaign for governor last night.

Kinder has been doing the Republican response to Nixon’s State of the State Addresses, just as Nixon did the opposition repost to Matt Blunt’s addresses. Nobody doubted Nixon was going to challenge Blunt’s re-election. There’s zero doubt at the Capitol that Kinder plans to challenge Nixon’s re-election.

There were a lot of guys with badges, blue shirts, and black Sam Brown belts all over the place at the Capitol last night. The Highway Patrol was not there to assist motorists trying to get home during the snowstorm after the speech. We don’t recall seeing that level of security for one of these speeches before. But after an incident such as the Arizona shootings, security rachets up for high profile public events involving a lot of public figures.

The governor’s speech was a little more than 40 minutes long. Probably would have been a lot shorter if there had not been pauses built in that indicated the audience or some part of it should applaud or if there hadn’t been times when people in the audience were singled out as examples of some good thing or another. State of the State addresses didn’t used to do that sort of thing. Brent Martin and I were talking about it at the Capitol lat night and it seemed to us that Governor Carnahan was the first governor to do that and he started it after President Clinton began the practice with the State of the Union address one year.

The longest State of the State speech in our memory was delivered by Joseph P. Teasdale, his first one, in 1977. By our stopwatch, it went on for one hour, seventeen minutes, and 39 seconds. It was a daytime speech in the days before governors decided the prime time television audience deserves to see them.

Back in those days, we used to have TWO speeches by the governor. The state of the state address laid out the governor’s legislative priorities. Then a week or so later, he’d lay out his proposed budget. The “twofer” is better, we think.

Governors used to give the press corps copies of their remarks early with an HFR (hold for release in the lingo of the press) for the time of the speech. That gave reporters a chance to write their stories and send them out as soon as the speech started, or gave us broadcasters a chance to spot good soundbites and be ready for them as well as prepare our stories so we could get them on the air faster. The last few governors, however, have treated their speeches as if they are the strategies for D-Day.

Never made much sense to us for them to do that. We’ve always suspected they were planning an invasion of Arkansas or something.

Governors also used to hold news conferences after their speeches so reporters could flesh out their stories about the general remarks in the speeches.

Governors haven’t done that for a long time. In fact, the last time Governor Nixon met with Capitol reporters, he took one question that wasn’t specifically tied to what he wanted reporters to report, then fled into an aide’s room.

He apparently wanted to keep us in the dark.

And nobody had a candle.