Illinois might be making a move that could improve Missouri’s government financial picture. Of course, it could also give us a new nickname: The Smuggler State.

Missouri has, by far, the lowest cigarette tax in the country. We rank 51st (DC is included in the list. When you buy a pack of smokes here, you pay only 17 cents in tobacco tax to the state. Virginia, which is 50th, charges thirty cents. Kentucky charges sixty cents. Both are major tobacco-growing states. Missouri grows a little bit.

The litany at the capitol is that lawmakers will not approve any “job-killing tax increases.” Not even on cigarettes. Some of them are saying, however, that the state might have to leave schools $105 million dollars short of the amount they’re supposed to get in the school foundation formula.

Here’s where Illinois comes in.

Illinois already charges a state tobacco tax of 98 cents on each pack of cigarettes, more than five times the amount Missouri charges. An Illinois House committee has recommended passage of a bill tacking another dollar onto that tax. Backers of the bill think it would raise about $375 million a year.
That higher state tax would go on top of any local tobacco taxes. In Chicago, which already has the nation’s second-highest state/local cigarette tax, the tax would reach $4.66 a pack. Next door Evanston, Illinois would have a state/local tobacco tax of $3.48 per pack.

Illinois lawmakers appear to lack the humanitarian concerns their counterparts in Missouri embrace. They don’t seem to care if they kill jobs in the cigarette sales industry.

That heartless attitude by Illinois is something Missouri needs to turn into economic development. 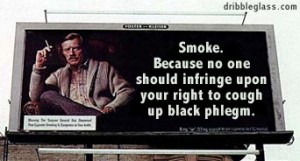 It’s time Missouri’s economic development department, its tourism industry, and maybe even the health department launched a joint effort to advertise Missouri’s low-tax cigarette tax. Missouri-sponsored billboards throughout Illinois would encourage people in that state to buy their cigarettes here. Imagine smokers flocking to our border cities where they will load up on cigarettes, producing a giant jump in cigarette sales tax revenue. They might also stay and have dinner or take in a ball game or see a tourist site. Maybe they’ll check into a motel for an hour or two and have a cigarette afterward. Maybe they’ll fill up their car with gas and help our ethanol industry by doing so, pumping more fuel tax money into our state highway system (which also is facing major financial difficulties).

The best part–and this is why the health department needs to sign on–is that they’ll take the cigarettes back to Illinois to smoke them, meaning their later health problems will be issues for Illinois to deal with, not Missouri. So Missouri would profit, generating more money for education, highways, and maybe for health programs, and Illinois would have to deal with the problems smoking causes.
Not only that, but the heavy cigarette sales to outsiders would diminish the supply for Missouri smokers and some might give up the habit out of frustration.

Talk about a win-win situation for Missouri!! 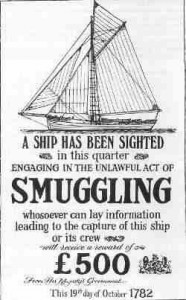 A dozen or so people already face federal charges in St. Louis of smuggling Missouri cigarettes to the Chicago area. The prosecutor says they bought them with our 17 cent tax here, then sold them in Chicago for the higher tax rate there, pocketing the difference. If Illinois jacks up its tax rate by another buck, Missouri smugglers could hit a bonanza.

Smuggling would be economic development. Smuggling would create jobs. Smuggling would bring Illinois money to Missouri as taxable income by the smugglers–if they file returns. Missouri should encourage them to do so. Legalize smuggling. After all, everybody knows the interstate commerce clause is a useless part of the constitution if a state wants to take action that is separate from national standards.

Let’s all root for Illinois to pass this dollar-a-pack cigarette tax increase.
It can mean so much to The Smuggler State.

p.s. Does it seem to you we are missing a bet by now advertising our low cigarette taxes in other states? Here’s how much our eight neighbors charge: Illinois 98 cents; Kentucky 60 cents; Tennessee 62 cents; Arkansas $1.15; Oklahoma $1.03; Kansas 79 cents; Nebraska 64 cents; Iowa $1.38. Clearly we need to do some advertising in our neighboring states. Get those “tourists” in here.