Seventy years ago yesterday (December 29, 1940) Adolph Hitler sent his Air Force to London in unprecedented numbers. Those who remember that day and the dozens of other days that constituted the blitz were children then. But those events marked their lives.

Bells have rung in Fulton at a reconstructed London church to commemorate the seventieth anniversary of the worst night of the London Blitz. At the same time, bells were ringing at St. Paul’s Cathedral in London marking the worst of 57 consecutive days of bombing by the German Luftwaffe.

Among those attending the event at St. Mary the Virgin, Aldermanbury, in Fulton were three people who saw the blitz through young people’s eyes. 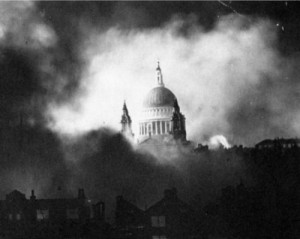 One of those who shared her stories with us is the mother of Rob Havens, the director of the National Winston Churchill Museum, which is housed in the undercroft of the church. The church, which had not been repaired after it burned that night of December 29, 1940 , was never repaired in London. In the late 1960s it was dismantled and taken to Westminster College in Fulton where it was reassembled and restored to serve as the campus chapel and as the Churchill Museum.

Westminster is the site of Churchill’s famous “Iron Curtain” speech of 1946 that defined the Cold War to come. In 1992, former Soviet President Mikhail Gorbachev spoke near the Churchill Memorial and pronounced the benediction for that conflict.

We have prepared a special report [AUDIO] of the commemorative bell-ringing at the Churchill Memorial.