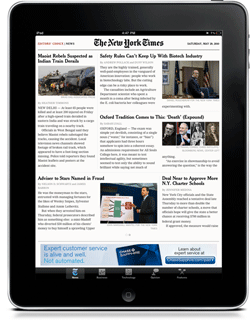 Roger Fidler invented the first e-reader prototype in 1991 when Internet sources were still not allowed for term papers, and anyone with a computer in their dorm room was probably rich.

He’s now with the Reynold’s Journalism Institute at the University of Missouri. I talked with him about the iPad, e-readers, how they’re changing news consumption and more. AUDIO: Interview with Roger Fidler (17 min)

Before you listen to the interview, I have a few confessions:

Confession No. 1 — I used to work in newspaper. MacIntosh has always been the leader in graphic design, pagination and layout. Even in my high school newspaper class, we worked on a Mac Plus with that one wondrously huge megabyte of RAM. (I find I’m still compelled to repeatedly hit “apple S” so I don’t lose my work.) So I’ve always been sort of a self-proclaimed Mac snob, declaring them superior to PCs to any reporter that would argue otherwise. Now, Macbook, iPod and iPhone equipped for a while now, I am the proud new owner of an iPad.

Confession No. 2 — It’s a great new toy. I’d like to say I’m using my iPad as a portal of information … for effect, I’ll even point to the entire screen of apps leading to various news and sports outlets. I’ll point to another screen with Flipboard, Facebook, Twitter and Craigslist to prove it’s bar-none when it comes to social networking. But the truth is, just as often, I’m playing with my Pocket Frogs, Solitaire, enjoying Tom Waits radio on Pandora or downloading a movie from Netflix to watch in bed.

Confession No. 3 — More is better. I’m quite positive I’ve downloaded enough apps in the past week to keep anyone occupied for years, but I … want … more. I want to have so many apps that I have to type in a search just to find which one I’m looking for. I’ve downloaded ones I’m not even sure I want, or will ever use. (If they’re free, that is.) There are a ton of entertainment / game apps out there, half of which are pretty much crap. I should probably choose more wisely, but if I don’t like it or don’t use it, I can always just delete it. (That’s right Finger Goalie, I’m looking at you.)

Confession No. 4 — The world needs to catch up. I’d like to download an audio editing app so I can cut sound for radio on the fly, but at a minimum of $20, I’m hesitant to pay for an app without trying it first. I would also like to read the St. Louis Post-Dispatch or the Kansas City Star instead of the Washington Post or USA Today, but they’re just not there … yet. Not to mention a Missourinet app, right? But how we would lay it out; what would it offer that our webpage doesn’t? If you’re an iNerd, I mean, iPad user too, let me know what you think. Would you get a Missourinet app for news, sports and weather? Or would you be too busy playing Angry Birds?