The Energizer Bunny called the Missourinet newsroom today. He was depressed. The ears were down. Clearly he wasn’t at full charge.

We made him feel a little better when we suggested that it was unfair for him, an advertising icon, to compare himself with a politician who never quits running. Two different animals, we said. The only thing you really have in common is that you both beat the drum incessantly.

Then he asked, “Does he ever beat the drum and go around breaking bad news to anybody?”

“No,” we said. “He’s pretty selective about his drum-beating. It wouldn’t be politically productive for him to go someplace and beat the drum to announce layoffs. He’s a good news-only bunny”

“Well,” said EB, drawing himself upright with a degree of pride, “There’s a big difference between us. I just keep going and going and going, beating the drum, in good times and bad.”

“You’ve given me a renewed purpose in life,” he said, “I think I can go on now.”

We’re not sure where the EB is today (His authorized biography says he lives in St. Louis.), but JN is beating the drum in Kansas City and Kirksville to talk about economic growth. Yesterday he was in Carthage, Springfield, Cape Girardeau and Arnold talking about making Missourians get prescriptions for over-the-counter cold and sinus medicines. Monday he was in St. Joseph and Macon announcing additional jobs.

We should have reminded our the Energizer Bunny that another reason he has trouble keeping up with the Governor is that Governor Nixon can do something bunnies can’t do.

UPDATE: A reader shares this photo of the governor and the observation “Nixon does exude energy. IN fact, it shoots out of his fingers.” 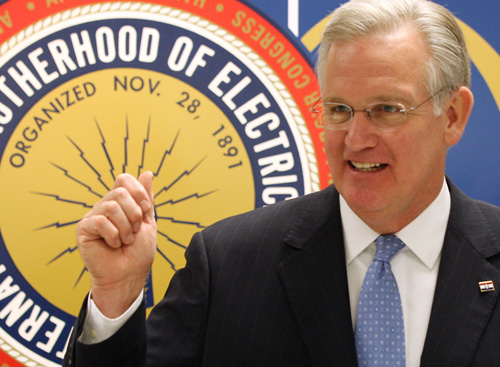