Governor Nixon held a meeting with some select reporters Wednesday to say that he will recommend substantial cuts to funding for higher education next year but will use his influence to keep colleges and universities from increasing tuitions to offset the cuts. The meeting affords us an opportunity for a discussion about the management of the news. 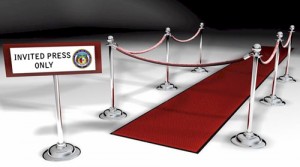 The Missourinet was not invited. The Associated Press Jefferson City bureau chief was. The education reporter for the Kansas City Star was invited as were education beat reporters for the Springfield News-Leader, the St. Louis Post-Dispatch, and the Columbia Tribune. An internet organization that reports on state governments was invited. The University of Missouri reporting program asked to be invited when it found out the meeting was taking place but was told it could not attend.

The Missourinet thinks it should have been part of the group, along with other members of the press corps not included. We think all of the news organizations in the Capitol should have been there to hear the governor and his education advisor, former Missouri State University President Mike Nietzel, and the acting director of higher education for the state, Dr. David Russell discuss these tactics and to probe the reasoning behind them.

We called the Governor’s Information Ministry. Communications Director Christine Bertelson told us the Governor asked the ministry to pull together a small geographically diverse group and a couple of organizations with national distribution for a background briefing on the governor’s higher education initiative. So they picked the beat reporters from those newspapers as well as the AP and the internet organization, Stateline.org. Stateline.org is a group with national distribution. The Associated Press has national distribution but the Jefferson City bureau predominantly serves Missouri news outlets. Bertelson says they wanted a small group for a briefing, not a news conference. So they had six news organizations present. None of them had asked to discuss the issue with Governor Nixon. Bertelson told us Nixon asked the information ministry staff to put together the group and to feature people who regularly cover education issues.

The regular capitol press corps has six permanently-staffed offices. Representatives of three of them, the Missourinet, the University of Missouri reporting program, the Jefferson City News-Tribune, and a startup group called Missouri News Horizon were excluded as were reporters from two central Missouri television stations that regularly cover the capitol. Somehow the idea that the regular capitol press corps covers education, especially the political machinations that shape state education policy, escaped the governor’s office. It appears most of us were considered as not knowledgeable enough about the subject to be qualified to be briefed. We asked Bertelson why, if the event was a background briefing, we read the AP’s account in numerous newspapers on Thursday. She didn’t know.

The Nixon Information Ministry thus excluded a news organization that provides news to sixty radio stations in Missouri including stations that are heard in every city where the University of Missouri has a campus, a regional university campus, and numerous other institutions of higher education (us), another that provides news to all of the University Missouri campuses plus Missouri State (the University of Missouri reporting program) , another that serves a state university within a long walk of the capitol (the News-Tribune), and a new organization that also serves several communities that either have higher education institutions or have people with children in them.

So they had six reporters instead of eleven in this briefing. Eleven would not exactly have been an unmanageable crowd in the spacious office of the governor for a briefing on how the governor plans to cut state funding to higher education next year and how he plans to pressure colleges and universities not to increase tuitions to try to make up at least some of the cuts. The moms and the dads and the students who are writing checks and borrowing increasing amounts of money to go to college might have appreciated hearing from their governor what his plans are for them and their schools.

Hold up your hands if you think the Information Ministry was of much service to Missourians on this one.

I see one….Is that a second one in the back?

Thank you Christine and you too, Jay.