Suppose the person you elected as your representative in the United States House of Representatives speaks to the service club you belong to during a campaign year in which he or she is running for another term. Would you vote for that person if they said:

“As you know, I took a stand during my campaign two years ago against earmarks. I said I did not believe members of congress should be able to put pet spending projects into the federal budget.

“I want you to know that I have kept my word.

“I could have gotten $15 million earmarked for the new hospital that was proposed here but I stood by my principles and passed up that chance.

“I thought about earmarking $10 million for the new highway interchange that your city officials say they have needed for the last five years, but that would have been the wrong thing for me to do.

“The only way your city could have gotten the $3 million for the historic park that your mayor says would be the crown jewel of your city was to have slipped it into the budget as an earmark. But as you know—and as your vote two years ago told me–you don’t want members of congress earmarking funds for locally-favored projects, so I refused to be drawn into the earmark process.

“I almost tried to earmark $350,000 for research at the local college on the breeding habits of the endangered polka-dotted squirrel that is the symbol of your town but I didn’t want to raise any doubts with you fine folks back home about whether I was being hypocritical in my stand against earmarks that was the focal point of my campaign two years ago when you elected me.

“While it would be improper of me to use this meeting as a campaign speech, I do hope you recognize that my refusal to bring more than $28 million dollars to this community is a principled position that is in the best interests of you, my constituents.”

You’d say to yourself, “Good Job, Congressman (or Congresswoman). You’ve got my vote again.”

You WOULD think that, wouldn’t you?

Of course you would.

C’mon. We don’t elect people to Congress so they can refuse to get things for the home folks. 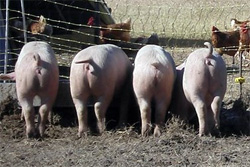 Perhaps you can recall–because we can’t–the last time an incumbent member of the legislature or the Congress campaigned on the platform that he or she did not do things for the constituency because, well, it just wasn’t the right thing to do or because those things would cause budget problems or because those things were sought by “special interests.” .

Let’s face it, folks. One of the big reasons we elect people is to get what’s coming to US or to keep what we have. If we don’t take it, somebody else will get it. We’re “special interests” too, you know. Even if earmarks go away, that’s not going to change. Everybody else’s money-grubbing representative is The Problem. Our representative is Our Solution.

Earmarks, Schmearmarks. Just get us the money. Find a way.