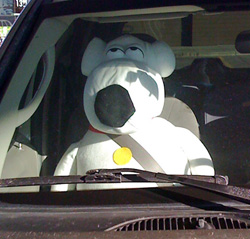 Rural lawmakers are gnawing at the gate in their eagerness to get started rewriting the puppy mill initiative when the legislature convenes in January. Those durn city folks who made Proposition B pass clearly don’t know what they’re doin’.

Goodness sakes alive! This thing puts our legislators into a stew. The most vocal anti-Proposition B folks don’t want to get into any philosophical discussions. They just want to correct what the voters enacted.

If the people who oppose Proposition B’s avowed effort to get tougher with puppy mills annually refuse to provide funding for proper enforcement of the laws that they claim are already adequate to be tough on puppy mills, where does that leave them?

If the people have a right to petition their government and the government then can ignore the wishes of the majority of the people, where does that leave the right of petition?

Did the farm organizations that advertised their opposition in rural areas during the campaign drop the ball by not launching aggressive enough educational campaigns in the cities? We don’t know the answer to that one because we live in the middle of the state, don’t listen to metro radio stations or watch metro TV stations, and don’t pay attention to the ads in the Kansas City and St. Louis newspapers. But was there too much preaching to the rural choir and not enough evangelism among the urban heathen?

If state lawmakers in the 2011 legislative session repudiate the will of the electorate, it will be the second time in our memory that the legislature has decided the majority will NOT rule. Several years ago, the legislature approved conceal and carry gun legislation after voters had rejected conceal and carry. Now some lawmakers want to reject the puppy mill law that voters just approved.

Clearly what we need is a petition campaign that creates a law saying we are not one state, that we are a state of us versus them (us being the country folks and them being the city people), and that votes cast in urban areas do not count if they disagree with what voters in rural areas want.

But how could you ever pass such a thing and if you did, what would keep the legislature from rewriting it?

Lawmakers argue, with some justification, that petition campaigns carry dangers. Citizen-written law does not go through the refining process that legislation faces, something that can take two or three years. But when citizens get the idea–from whatever source–that their government is not seriously addressing an issue let alone refining it, citizens will write their own law.

It is that kind of public mistrust that put many of the people in office last week who now want to cancel what the public has enacted.
Winston Churchill had it right when he spoke to the House of Commons on November 11, 1947 and noted, “No one pretends that democracy is perfect or all-wise. Indeed, it has been said that democracy is the worst form of government except all those other forms that have been tried from time to time.”

You sure got that one right, Winnie.