Those who think it’s glamorous and exciting are basing my entire career on the 60-second radio story or the 200-word Web story they hear and see. They don’t hear and see the hours of sitting through meetings, waiting for phone calls, crawling on the ground to plug in equipment.

Those who think it’s horrifying are right. We hear the worst of the worst. The most heinous of crimes. We see details and photos of tragedies we don’t post online or speak of into the mic

However, I liken it to being a doctor or a police officer — minus the fact that people’s lives are not in our hands, of course. If doctors and cops became emotionally invested in every person they treated, every case they handled, took the sadness home with them to their families each and every day, it would not only be detrimental to their careers, but also to their psychological well-being.

And so we do our jobs. While not ignoring the seriousness of the events around us, we plug in our equipment, pen and notebook in hand, and ask the questions, record the answers. We siphon out the legal speak, the minutia, the information too gruesome for public consumption and we bring you the story.

Such is covering an execution. Or, in my case, non-execution.

Here is my experience. It was, as we say, my first time.

Tuesday morning, we had placed the odds on the execution happening at 12:01 a.m. Wednesday morning at about 50-50, maybe 60-40. When the court decisions were still in flux at 2 p.m., we dropped the odds that it would happen considerably. However, if there’s even a 1 percent chance that it goes through as scheduled, we go.
So at 3:30 p.m., I left the newsroom, threw a change of clothes into a duffel and headed for the Super 8 in Bonne Terre.

It was a gorgeous drive.

That’s what I was thinking during the long drive there. The trees were not as vibrant as I had expected, but the day was sunny and bright, the breeze was nice, and being on the road in the open air was better than being trapped in my cubitron for the afternoon.

Of course, ceaseless thoughts of nothingness were interrupted by phone calls from the Attorney General’s office with updates of how the process was moving through both the Missouri Supreme Court and the U.S. Supreme Court.
I got to Bonne Terre, checked into the Super 8, which is right across the hill from the prison. It’s a town of around 3,000 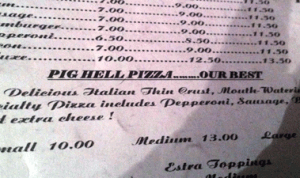 I drove to a bar / restaurant that was showing the Yankees / Texas game and had “Pig Hell Pizza” featured on its menu. I had some fried shrimp and a Dr. Pepper and played solitaire on my phone. I listened to a patron complain about his ex wife in between yelling at the game on T.V. I paid the tab and went back to Home Sweet Super 8.

About 9:30 p.m. I called the prison and asked if I should go there. I was told people were showing up, so, probably so.
I was led through security and into a press room of sorts. The Associated Press was there, and so was WDAF-TV out of Kansas City, where the crime occurred in 1989. We waited together. We shared notes, contact information, decided where to set up for an interview with the spokesman for Corrections. The three of us represented the state media as a whole. We were print, television, radio and Web. We were in it together, might as well share and share alike.

At 10:40 p.m., Corrections officials informed us they would stand down. At 10:49 p.m., the Attorney General said the execution would not happen at midnight.

The death warrant was still good for 24 hours though, so we were still in wait-and-see mode.

We interviewed Mike O’Connell, spokesman for corrections, and went back to our rooms.

They did, so I went back to sleep. I was awakened by calls from the Attorney General’s office and the prison warden to say the execution had been called off.

So I packed up and hit the road. It was another gorgeous fall day in Missouri, and although I was tired, it was still better than being in my cubitron.

Meanwhile, Roderick Nunley was moved from his room near the death chamber back to his own cell, where he awaits the next move from the courts.