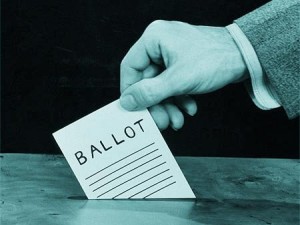 This thought crossed our mind as we were reading a story in one of our newscasts a few days ago about Proposition A, the earnings tax proposal.

We hear during every election cycle that the right to vote is one of the most precious rights we have as American citizens.

Then why are we so willing to give it away?

Proposition A on the November ballot would prohibit voters in any Missouri city outside of St. Louis and Kansas City from ever being able to enact an earnings tax. Whether citizens of any other town would approve an earnings tax is immaterial under Proposition A. As we understand the proposal, Missourians will be voting on whether to deny their own right to vote on a specific issue.

Proposition A seems a little contradictory. It requires voters in Kansas City and St. Louis to vote on whether to keep their cities’ earnings taxes. But it then seeks to deny people everywhere else the right to decide if they want an earnings tax to begin with.

Twenty years ago, Missourians voted to deny themselves the right to vote on whether to re-elect their own stat representatives and state senators after eight years in their offices. This year, voters will be prohibited from deciding if lawmakers with about 500 years of experience representing them in dealing with the state’s most significant issues and problems should continue to represent them in the Missouri House and the Missouri Senate.

Proposition A seems to want voters to deny themselves the right to vote on whether to tax themselves—if the issue ever should come ujp.

We are reminded of a speech Abraham Lincoln gave to the Young Men’s Lyceum in Springfield, Illinois on January 27, 1838. . After dismissing thoughts that the still young nation (this was only about 50 years after the adoption of the Constitution) could be conquered by a foreign power, Lincoln asked, “At what point, then, is the approach of danger to be expected?”

The answer: “If it ever reaches us it must spring up amongst us. It cannot come from abroad. If destruction be our lot, we must ourselves be its author and finisher. As a nation of freemen, we must live through all time, or die by suicide.”

And voting to take away our own right to vote is… ?