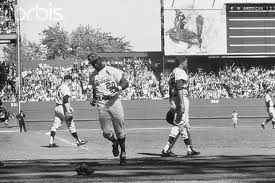 As we write this, the St. Louis Cardinals are seven games out of first place with 17 games to play. They are not playing well and an inconstancy that has plagued them all season has become especially troublesome since that invigorating three-game sweep of the Reds oh, so long ago.

Write them off? It’s easily done but some older folks who can remember 1964 are likely to hold out hope longer than many younger fans. Why keep playing hard every day? Why keep hoping until the magic number reaches zero? Let’s remember September, 1964.

The Phillies entered September firmly in control of the 10-team National League in those days when playoffs were needed only if two or more teams finished in a tie in the regular season.

On September 20, the Phillies beat the Dodgers to move six and a half games ahead with only a dozen games left. Two thousand fans greet them early the next morning when they return from Los Angeles. The lead is commanding. The Phillies with a record of 90-70 are on track to win their first league championship in years.

September 21. Reds, in second place, beat the Phillies 1-0 behind John Tsitouris. Chico Ruiz scores the only run when he steals home while future Hall of Famer Frank Robinson is at bat in the sixth inning.

September 22. The Phillies lose again to the Reds, 9-2 in a game highlighted by Pete Rose’s steal of home. Reds Sweep the Series and pull to within 3 1/2 games of the Phils. The San Francisco Giants and the St. Louis Cardinals are five games back. The Cardinals have made up six games in the past month.

September 23. Phillies are swept by Cincinnati 6-4. Next up for P:hiladelphia, the Milwaukee Braves, struggling to stay in fifth place, coming off a split of a four game series with the Pirates.

September 25. A heartbreaking loss for the Phillies. Phillies lead 1-0 going into the seventh when the Braves score two and add another one in the 8th. Johnny Callison hits a two-run homer for Philadelphia tie it. Braves go up 5-3 in the 10th on Torre’s two-run homer. In the bottom of the tenth, with a man on, Dick Allen hits a dramatic inside the park home run to tie the game again. But it all falls apart for the Phillies in the 12th inning when Gary Kolb singles for the Braves, Gene Oliver walks, Eddie Mathews singles and Phillies catcher Clay Dalrymple makes an error. 7-5 Milwaukee.

September 26. Rico Carty hits a bases loaded triple in the ninth to turn a 4-3 Phillies lead into a 6-4 Braves win.

September 27. Johnny Callison homers three times for Philadelphia but the pitching collapses, allows the Braves 22hits including five by Milwaukee outfielder Lee Maye. and Milwaukee wins 14-8. The Reds sweep a doubleheader against the Mets. The Reds move into first place. The Cardinals, who had been third just a week earlier, are on a roll and they can sniff first place themselves.

September 28. The Phillies and the Cardinals open a critical three-game series in St. Louis. The Cardinals win the first game 5-1 and move into second place, putting the Phillies back to third and still looking for their 91st victory.

September 29. Reds-Pirates in Cincinnati. The Reds pound the Pirates’ Bob Friend for 11 hits but cannot score a run. Pittsburgh wins 2-0, ending a nine-game Cincinnati winning streak. In St. Louis, Ray Sadecki wins his 20th game of the year with a 4-2 victory or the Phillies. The Cardinals now have won seven in a row. The Phillies have lost nine straight.. The victory pulls the Cardinals into a tie with the Reds for first place, the first time all season St. Louis has been in first place.

September 30 Curt Simmons of the Cardinals out pitches Bunning in an 8-5 Redbird win. Cincinnati loses again at home to the Pirates and the Cardinals all of the sudden have a one game lead. The Cardinals have won eight straight. The Phillies have lost 10 in a row. They can no longer win the league championship outright. Only if the Cardinals lose their remaining games to the Mets and if the Phillies beat the Reds in the last two games of the season does Philadelphia have a chance to win the flag and that will have to be in a playoff of some kind.

October 2. Cardinals at home against the doormat Mets. Mets win 1-0. Phillies in Cincinnati. The Phillies finally get their 91st win.

October 3. Mets beat the Cardinals again. Phillies and Reds are idle. The standings:

The Giants still have a mathematical chance but they fall out of contention by losing to the Cubs 10-7. But the National League now is starting to scramble to figure out how to manage a three-team playoff.

October 4–The Phillies defeat the Reds 10-0. Both teams are now 92-70. The Cardinals have to win or they’ll be in that three-way playoff situation. The Cardinals are playing the Mets again. The Cardinals beat the Mets 11-5 to finish 93-69, a game up on both the Reds and the Phillies and headed to their first World Series in 18 years. The Cardinals won 38 of their last 49 games. The “Phillie Phold” becomes baseball legend

The Cardinals go on to face the mighty New York Yankees and win the World Championship in seven games. The day after the Series ends, both teams lose their managers. The Yankees fire St. Louis native Yogi Berra, citing his lack of control over the team and the lack of respect players have for him. Johnny Keane stuns the Cardinals by resigning. Less than a week later, Keane becomes manager of the Yankees.