St. Louis is going to pot. Or to THE pot.

A few weeks ago we wrote that a restaurant bathroom in St. Louis was contending for the title of America’s Best Restroom. A company that makes fixtures for johns was promoting itself with the contest.

The company says the Most Popular Potty in the whole nation is at the Fountain on Locust, a St. Louis eatery that claims to be the city’s most photographed restaurant. It’s the St. Looey Loo. [Photo: UPI/Bill Greenblatt] 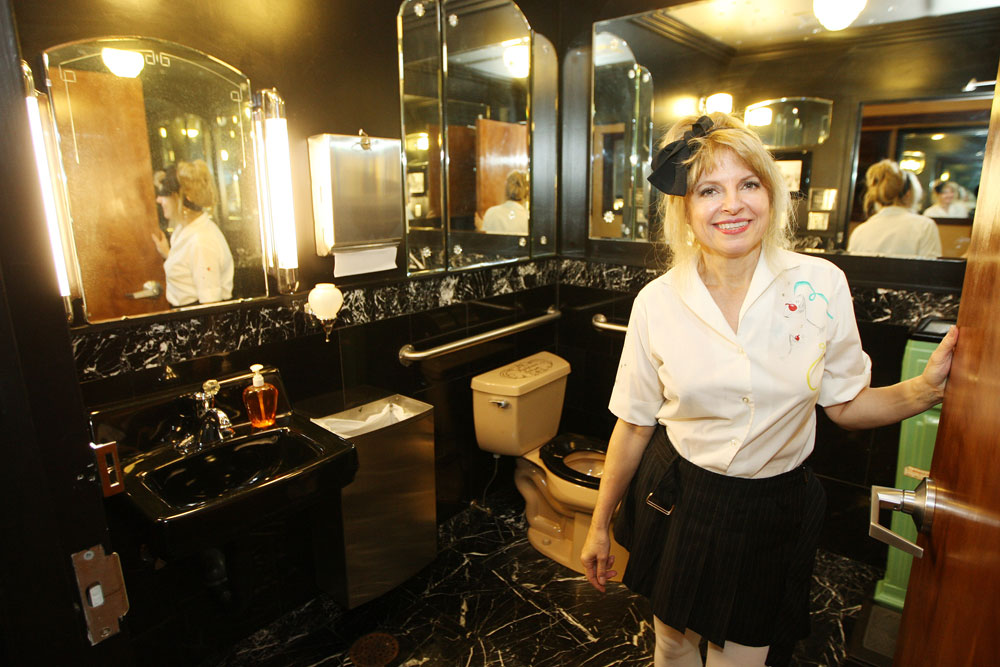 The contest organizers cited the Fountain throne room for its “hand-painted murals, ornate fixtures, and designer mirrors.” It was rated better than the powder room(s) at the Grand America Hotel in Salt Lake City, which was cited for its “floor-to-ceiling commodes” (we have trouble visualizing that), the “Beaux Arts designed” lav at the Bryant Park Hotel in New York, the Egyptian designed restroom at the Embassy Theatre in Ft. Wayne, Indiana, or the indoor privies at the Muse Hotel in New York, which has “individualized restrooms, each themed for a different muse.”

Bathrooms are for reading, not for getting in tune with your muse. Muse, hmmmph.

The owner of the Fountain says folks who have answered the call of nature in her “little no-budget, recycled bathroom” (as she described it to the St. Louis Post-Dispatch) answered her call to vote for her loo.
Last year, another Missouri restroom was voted number one. The 2009 Number One Toilet is at the Shoji Tabuchi Theatre in Branson, noted for its gold fixtures and the pool table.

Perhaps it’s time for a new motto on our license plates. The Show Me Your Toilet State. Or The Bathroom State.

Maybe it’s time to ditch the Bluebird as the official state bird and use the loo(n).

Wonder if it will show up as a place to visit in next year’s AAA Guide. Will your GPS take you to it as a tourist site?

Lord, Lord, Lord. What’s happening to our blog? We’re supposed to write interpretive pieces that give you behind the scenes look at the Missourinet or the news business….and we wind up writing about goats and bathrooms.

We know what happened.

Our muse spoke to us.