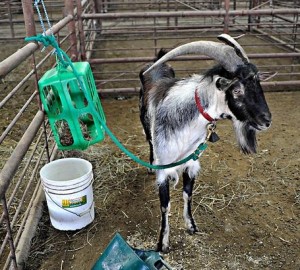 We cannot tell you how relieved we are to get word that the Mexico Goat will not spend the rest of his life in the Audrain County Goat Pound or be sent off to the Goats-R-Us Processing Plant.

The Goat That Made Mexico Famous Again has been sold at auction at the Mexico Stockyards to a group headed by a member of the Muddy Rednecks Mud Run Club. The winning bidder says he was surprised by the number of people who wanted TGTMMFA and how much he finally had to bid to get him.

Although the MRMRC guy did the bidding for TGTMMFA, it was actually a group called the FBF (Free Billy Fund) that put up the $2500 that secured The Mexico Goat’s future.

Somebody has dubbed him with the highly-unoriginal name of Billy but surely the City of Mexico can come up with something more distinctive for TGT etc.

There are probably some folks in Mexico who are offended that a mere goat is getting so much attention and that so many people are enjoying his story. To those people we suggest, “Loosen Up!” We suggest they look at Warrensburg, which has capitalized on a hunting dog that got onto somebody else’s property and was killed as a suspected livestock murderer, or Marshall, which became famous years ago because it had a dog that could pick winners of the Kentucky Derby, or Sumner which is known for Missouri’s biggest goose.

Anyway, TGTMMFA is off to a farm in the Mexico area where he’ll live with two donkeys that had been in the stall next to him at the stockyards. Apparently somebody thinks they bonded or something.

In this time of political dissonance and bad manners, there’s something charming about the story of a simple goat’s few days of freedom. We probably haven’t heard the last of TGTMMFA. At least we hope not. We need some feel good stories now and then.