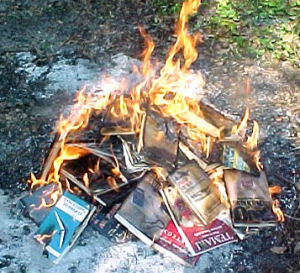 The proposed burning of the Muslim holy book in Florida puts the spotlight again on decision-making by the news media — among other things. Should we be paying attention to the minister of a congregation reported to be about fifty people who vows to do something most people are loudly proclaiming as outrageous?

Those of us in the reporting business often face this kind of issue all the time. The prime example for Missouri media is deciding what to do about Fred Phelps, the Topeka minister of another small group who sometimes organizes or threatens to organize protests at funerals of Missouri soldiers killed in action. We ask the same questions you do. Do we only encourage more of this kind of behavior by covering it or even mentioning it? Is it better for the public to know there are people like this out there?

Not long ago the Jefferson City media had to decide what was the appropriate thing to do when a neo-Nazi group demonstrated at the Capitol and paraded through part of downtown. Several years ago a pro-homosexual group held a noisy demonstration in the Capitol rotunda when the legislature was considering an issue it considered anti-gay. We had to decide whether to cover the demonstration and if we did cover it, HOW to cover the event which included a repeatedly shouted chant that included the f-word.

These decisions are an extension of the editorial decisions we have to make every day. We are contacted by group after group that thinks we should cover their special issue event. Do we? Are all special interests created equal? Do we skip the event because we have covered the issue in other ways? Do we cover an event because it will be provocative and will likely produce great sound bites? Do we cover an event that makes a sensible point but does it in a manner that obscures the point; in other words, is the shouted slogan at the event more important than a conversational argument that the shouts replace? Do we cover something just because it is controversial (an animal cruelty demonstration) or do we ignore something because it is controversial (a KKK rally)?

In one way or another news departments have to evaluate events and personalities and make subjective decisions about the newsworthiness of the event.

So should we cover gay-hating ministers and book-burning preachers? Should we cover those who deny the Holocaust or who say nobody ever walked on the Moon or those who continue arguing that President Obama was not born an American citizen? How about those who claim Health Care Reform is a sack of snakes or those who say retain tax cuts for the rich is the key to economic recovery? Should we cover those who say same sex marriage is a right, that government has a responsibility to help the poor, that teachers deserve higher pay, that taxpayers should not pay for new stadiums, that war in the Gulf is unjust, that anybody should be able to own any kind of a gun or that nobody should be able to carry a concealed weapon? Should we cover the anti-death penalty demonstrators who show up at every execution?

The underlying issue for the reporter is another question. Is the public better off knowing about these people and these issues? Other factors enter into the ultimate decision about what and who we cover. But our judgment begins with that question.