Every year that goes by makes it less likely that we will see again a collection of this magnitude drawn together.

The scope of the work of Missouri’s foremost 20th century wildlife artist Charles Schwartz is hard to measure. Although he died in 1991 his drawings and paintings are still widely-used and the landmark book he and his wife Elizabeth wrote, Wild Mammals of Missouri remains in print and in demand more than fifty years after its original publication date, admired not only for a technical excellence that appeals to wildlife professionals but for its readability that works for the layman as well, Charles Schwartz was nationally-known for his wildlife drawings, paintings, and sculpture. Some called him “Missouri’s Audubon” to indicate the quality of his life’s work. . 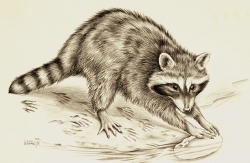 More than 500 of his drawings, paintings, and sculpture are going on display in a few days in Columbia at about the same time the Conservation Federation of Missouri celebrates its 75th anniversary. A series of events is scheduled to recall the work of this distinguished Missouri artist. It would be worth your time to take part in one or more of these events.

The State Historical Society and the Conservation Federation are joining in a groundbreaking collaboration with Bass Pro Shops to bring together many of these Schwartz works. The first event is a TICKETED RECEPTION at the Bass Pro Sportsmen’s Center in Columbia from 3-8 p.m. on Friday, September 10. Tickets are $30 $10 and provide for entrance to a wine and cheese opening with guided tours by art, history, and conservation specialists such as the Executive Director of the CFM, Dave Murphy, the Historical Society’s art curator Joan Stack, and the Department’s award-winning photographer Glenn Chambers, a man many will remember as the department’s “Otter man.”

For the next two days there will be a general public exhibit coupled with workshops and children activities at the same location. Folks attending can see and learn from photographers and landscape and wildlife artists.. There will be several programs for children, too.

The art and sculpture will move to the State Historical Society’s art gallery for an opening on Tuesday, September 14. They’ll stay on exhibit through January, 2011. The Historical Society’s archives and gallery are in the northwest lower corner of the Ellis Library (the main library) on the University of Missouri Campus in Columbia.

And here’s an idea for football and basketball fans: When you go to Columbia for a Tiger football or basketball game, drop by the Historical Society and take in the Schwartz exhibit. The Society art gallery is open 9-3:15 on Saturdays and during regular business hours M-F. It’s free and a great place to visit at other times, too. 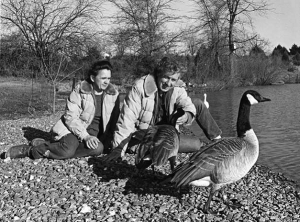 Charlie and Libby, as their friends called them, lived in rural Jefferson City, their home surrounded by the kind of land the wildlife they loved shared with them. They had met while they were students at the University of Missouri and married in 1938, two years before Charlie joined the Missouri Conservation Commission as a biologist. The commission published his first book, The Prairie Chicken in Missouri in 1945. For more than three decades after that the Schwartzes produced publications, two dozen award-winning wildlife and conservation films and television programs, and wildlife studies. His drawings illustrated hundreds of issues of “Missouri Conservationist” Magazine and are sometimes still used. Visitors to the Missouri Department of Conservation headquarters’ lobby will see a monumental mural he painted for the department’s fiftieth birthday in 1987.

The late Executive Director of the State Historical Society of Missouri, Jim Goodrich, wrote, “Not only did Missourians his biological research, writings, lectures, motion pictures, paintings, bronzes, drawings, and photography, but people throughout the nation and the world benefited from his commitment to nature and its creatures”

Their legacy goes on display September 10th in Columbia. It’s worth your attention now through January