From time to time somebody asks where we get the topics for Across Our Wide Missouri, our daily program that recounts Missouri history on the day it happened.  The answer is that we stumble over topics everywhere. Newspaper obituaries often give us subjects. Sometimes events happen that we known are instant history and we file things away for telling years from now. Sometimes we are reading a book and all of a sudden Missouri jumps out and lands right in our lap—as was the case several years ago when we were reading about a man whose real name was John Rowlands, a Confederate prisoner in Missouri during the Civil War, later a newspaper reporter covering state government (we really got interested when we saw that) and later, under the name of Henry Morton Stanley, finding the lost missionary, Dr. David Livingston, who knew where he was all the time.

It happened again a few months ago with a book my son gave me for Christmas. It was about one of the greatest crime fighters America has ever known. One incident in his life brought him to Jefferson City where he kept an international conspiracy from bearing fruit. It is not a story that you will hear on Across Our Wide Missouri because we are unable to pin a specific date on the events we are about to describe and we have not found any newspaper accounts that confirm the events recorded by his biographer. Here, however and with some added information, is the story as it is unfolded in the book.

John Reid is thought to have been born on September 14, 1850 according to three biographers who have tried to piece together his life from fragments of information in various sources they have consulted. His older brother got into law enforcement after serving in the Civil War and was later killed in the line of duty. John studied law at a college in the east, where he might have been involved in college theatre productions that helped him work with disguises later in life when returned to the West and also became a lawman. His career and his life were almost ended when a suspected killer and robber he was chasing ambushed him and left him critically wounded.

Reid recovered with the help of a boyhood friend who soon became his partner in a private and sometimes personal crime-fighting career. They were, in effect, vigilantes or maybe semi-bounty hunters. Nonetheless, they solved a lot of high-profile crimes in their day. In one of them, Reid caught and killed the man who ambushed him twenty years earlier.

The event that brought Reid to Jefferson City probably happened in 1888 as close as researchers Win Eckert, Mark Ellis, and Matthew Baugh can determine from their extensive digging.

This was a period of booming scientific accomplishment in our country. And when researchers in Arizona discovered a previously unknown element in some rocks, probably remnants of a meteor in fact, their discovery caused quite a stir in Washngton and apparently in Europe. The story is not clear about which country wanted this material for itself but that country launched a covert effort to corner the supply before the United States government could examine it. Two stagecoaches carrying ore samples disappeared before they reached St. Louis, (this is where the story suddenly became more interesting as I read it) where a train was to take the material on to Washington.

The government hired John Reid and Associate to keep an eye on a third stagecoach shipment headed from the colorfully-named Gunsight Mesa in Arizona to St. Louis. The addition of a man and a woman as passengers gave the appearance that the coach was on routine business. Because Reid’s face had become well-known in the area, he wore a disguise and stayed close to the stage but out of eyesight.

Things went well as the coach crossed Arizona, New Mexico, Texas, and Arkansas, traveling only in the daylight. Butt it ran into trouble when it reached Missouri. The travelers overnighted in Gopher City, a town that no longer appears on Missouri maps but in those times was described as being a couple of hours west of Jefferson City, Missouri. (Now my interest really was piqued.). The next morning, shortly after the stage set out on the next leg of its trip to St. Louis, it was stopped and robbed before the two secret agents could reach the scene. The driver and the guard were killed. Reid and his friend, joined by government agent John J. Black who, unknown to them, also had been shadowing the shipment, set out in search of the robbers, Reid asked the male passenger if he could handle a team of horses and when he learned the man, James Barton, could do it, he asked Barton to take the stage on to St. Louis and report to the federal agent Reid was supposed to meet there about the robbery, J. C. Hamilton..

While Reid was chasing the robbers, Barton and the woman passenger, Mary Demming headed not to St. Louis but to Jefferson City. As the account has it, Barton and the woman were actually the foreign agents and in fact it was they, not their two accomplices, who had killed the stage driver and the guard. Their accomplices were to hide the ore samples and then escape. Unfortunately for them, Reid and his friend caught them, although they killed Black in the shootout. Black lived long enough to supply Reid with a password he was to use when he met Hamilton in St. Louis. Hamilton was to take control of the ore and see that it reached Washington safely by train. Reid set off for Jefferson City only to learn Barton and Demming had gotten there first and had convinced Sheriff Grant and his deputy that Reid was the mastermind behind the robbery and the killing. Sheriff Grant convened a seven-member posse to track down Reid. One of the seven was Hamilton who had decided to meet the stagecoach in Jefferson City instead of waiting for it to reach St. Louis. The railroad, after all, had reached Jefferson City more than 25 years earlier and there was no need to continue risking the cargo for another day or two of stage travel between the Capital City and St. Louis.

Reid, not knowing what had happened in Jefferson City rode right into the clutches of the posse which did not recognize him because of his disguise and did not believe his identifying materials were genuine.

After a scuffle in which some shots were fired but nobody was seriously hurt, Reid was able to convince Hamilton of his identity by mentioning the password Black had given him. When Hamilton knew the response, it was clear Reid was the good guy and that Barton and Demming were up to no good. They were arrested. John Reid’s true identity was firmly established . The ore was recovered and shipped to Washington.

The record is silent on just what the element was that scientists thought was found in the ore or what value it had. Perhaps, in fact, it was nothing new after all—the research we’ve seen does not indicate there was any follow-up. The last we knew, Barton and Demming were in the Cole County jail. We don’t know if they were prosecuted or deported. But this was, after all, a high-security secret operation so lack of press coverage is not that surprising. Reid and his associate headed back to the southwest where they continued their law enforcement/vigilante careers for several more years. Researchers Ellis, Baugh, and Eckert think they probably dissolved their partnership early in 1896, three years after University of Wisconsin historian Frederick Jackson Turner presented his landmark paper declaring the frontier was closed. The west was filling up. The buffalo were almost gone. The Indians were contained on reservations. Reid by then was in his mid-40s and all of those years of rugged living were probably starting to tell on him. It’s thought he left the West, returned to Detroit where had spent several years as a boy and married a young woman he had met years before while she was living with her uncle in Texas. We don’t know when he died but he apparently lived long enough to inspire his grand-nephew to become a prominent crime reporter and newspaper publisher in the 1930s.

Well, this has been a long, long story. But that’s how we discover stories for Across Our Wide Missouri. We’re just reading along, often just to enjoy a book, and all of a sudden there’s a Missouri story. There is a little more to this one, though. But you’ll have to go to the next page to get it.

The reason this story of an international plot that was broken up in Jefferson City about 120 years ago will never appear on Across our Wide Missouri is because it’s fiction.

John Reid’s older brother was Texas Ranger Captain Dan Reid Sr. John was with Dan and four other Texas Rangers when they were ambushed at Bryant’s Gap by Butch Cavendish and his gang. All of the Rangers were killed except John, who was found and nursed back to health by a Potawatomai Indian friend named Tonto who gave John Reid the name by which is is best known in Western lore—The Lone Ranger. 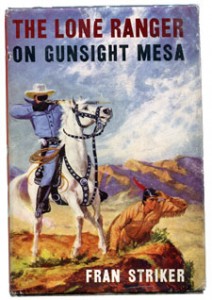 Ellis, Baugh, and Eckert suggest that the Lone Ranger’s eventual wife, Amy Striker, was the aunt of Fran Striker, who later wrote about 18 Lone Ranger novels based on George W. Trendle’s dramatizations on radio station WXYZ in Detroit.

John Reid’s brother, Dan, had a son who was with his mother in Virginia when Dan was murdered. At times during the summers, Dan Jr. would come west and take part in some of the adventures with his uncle, The Lone Ranger. Dan Jr. had a son named Britt who became a crime reporter for the Daily Sentinel and once, while in Japan, met a young man named Ikano Kato, who came to America with Dan when Dan returned. Britt Reid followed in his uncle John’s footsteps by also donning a mask and fighting crime. The Lone Ranger’s grand-nephew became the Green Hornet.

And if you want to read the book about the Lone Ranger’s only known fight for law and order in Missouri, you can search for: The Lone Ranger on Gunsight Mesa by Fran Striker, Grosset & Dunlap,New York, 1952