We note today the death of another part of Missouri’s musical heritage, the second big loss in the last few weeks.

The Springfield News-Leader reports Bluegrass Hall of Fame mandolin maker John Wynn has died. He was 72. Ten days ago, Mitch Jayne died. He also was 72. 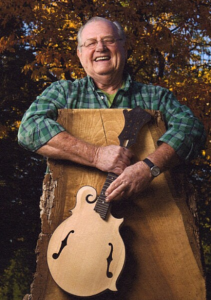 John Wynn made mandolins and banjos. Just a few days ago he and his wife, Betty, and other members of the family were still performing every Saturday night at Luigi’s Pizza Kitchen in Nixa. It was Betty who encouraged him to learn the banjo. It was John who encouraged himself to make mandolins—because he thought the instruments he’d been using were inadequate. He built about 200 of them.

Mitch Jayne cut a wider swath through life. He wrote five books. For two decades he was a newspaper columnist. He had a nationally-recognized radio show on Missourinet affiliate KSMO–“Hickory Holler Time”–that featured the “Snake and Tick Market Report.” He played the bass fiddle with the Dillards and toured internationally with them. He wrote some of their best known works. He was fascinated by the use of Elizabethan English by some of the students in the one-room schools where he taught in Dent County.

Bluegrass isn’t for everyone but there is joy in it. These two men were part of that spirit for a long, long time and whether you consider Bluegrass a form of country classical music or not, the music in and of their lives was a joy to thousands who saw and heard them perform.

One of the great unsung benefits of technology is that it saves the images, the sounds, and the pleasures of performances long after the performers are gone from the stage. They live on on YouTube and in other places.

John is playing “The World is Waiting for the Sun to Rise” on the banjo while the camera takes you on a tour of his workshop in one segment. Mitch is having a lot of fun on the road with the Dillards is several other segments.

They’re gone. But their joy remains.