…the bottom drawer, to be honest.

The bottom drawer of the desk in our Capitol office contains the Senate Journals of a half-dozen or so filibusters the Missourinet staff has survived. The Tuesday-Wednesday Purgason and Company filibuster is now part of that repository of history.

For those of you who weren’t there or who have never survived one of these trips to Boredom with sidetrips to Tedium, Monotony, Ennui, and Wearisome, here’s a bit of a primer on the filibuster and one of the ways sometimes used to stop it.

The legislative logs placed across the tracks to stop these slow-moving runaway trains are called “PQ.”

You won’t find any House Journals in our bottom drawer collection because the House uses the “previous question” as a hammer to control and sometimes to stifle debate. The Senate uses the PQ rarely. The PQ is a motion that is part of the parliamentary process that comes into play at times during the consideration of legislation. It’s known in Congress as a “cloture vote.” Here, in general, is how it works.

Let’s say we’re dealing with Legislative Bill 57. Bills in Missouri are numbered according to the chamber they come up in–House Bill 57 or Senate Bill 57. But we’re going to be unicameral for our purposes.

Buster can do several things if he opposes the bill as presented. He can offer an amendment. He can offer a substitute motion, perhaps to lay the bill on the table or to postpone debate until a date certain or something like that. He can question the sponsor or anybody else. He can speak on the bill. He can move to send the bill back to committee. He has several alternatives. Let’s assume that Buster might be inclined to vote for the bill if it were changed in some way to make it more palatable for him or his party. He begins to talk. He probably has let it be known he’s going to do this and he probalby has solicited some friends. He now has control of the floor until he gives it up.

Here’s an important thing to remember about filibusters: They are a stronger weapon when the clock and the calendar are becoming greater factors in a legislative session. A filibuster in January is not nearly so potent as a filibuster in May. The legislature convenes in Jauary and adjourns in mid-May. Most bills are passed in the last two or three weeks of a session.

So it’s May 1 and Phil has the floor on a bill he cannot accept without major changes. S. L. has worked for the last four months to get a bill that he and whatever interests are behind it want. 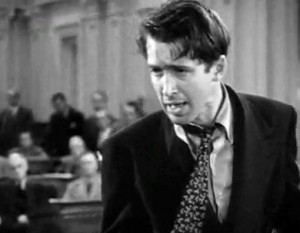 Forget about Jimmy Stewart and the “Mr. Smith Goes to Washington” 1930s Hollywood stuff. The Missourinet has witnessed only one filibuster that approaches the one-man stand from the movie–when Senator Matt Bartle of Lee’s Summit ran a solo effort for 17 hours to block a gubernatorial appointment.

One of the things never explained in the Jimmy Stewart movie as far as we remember is how he dealt with his bladder. Bartle manufactured breaks for himself by noting the absence of a quorum, meaning he saw fewer than 18 senators in the chamber. While the senate was shut down waitng for 18 senators to check in, Bartle was able to dash to the bathroom a short distance from his desk and dash back before the quorum was determined. Had he been off the floor when the quorum had been attained, he would have given up the floor. But the agile and speedy Bartle always managed to get back.

Bartle had no allies. He had to do all of this by himself. To conserve energy, he leaned on his chair until his chair was removed because the senate rules say a Senator musts “stand at his or her seat.” Stand. Not lean. Colleagues usually like to bring filibustering Senators cups of water to keep the vocal chords from getting dry–and to fill up the bladder. Bartle finally had to surrender when he no longer had the energy to stand and read and speak. Bartle finally gave up the floor and the appointment finally was approved.

Purgason went about five hours before another Senator gave him a break. It was Bartle who also was agaisnt the Ford Bill. A senator can turn the floor over to a co-conspirator and leave the room but not give up control of the floor if the co-conspirator asks to inquire of him. The inquiry could be something like, “Senator, would you be interested in knowing what this book says about this issue?” “Yes, I would be,” Buster might say. That clears the way for Senator C.R.Ony to begin to read from the book. While that is going on, Buster can go take a nap or a potty break or go have a meal–whatever best suits his purposes. After a while, Buster comes back and C.R.Ony says, “Wasn’t that interesting, Senator?” and Buster says it was and thanks Ony then goes on again. If Buster gets tired of talking he can ask to inquire of other Senators who can read or speak or engage in lengthy answers to questions if they wish.

But Buster must be careful because the rules say he can only speak on a bill once. As long as he is accepting inquiries in whatever form they are presented, he still have control of the floor and is considered to be still speaking.

To further insulate himself from giving up the floor inadvertently, Buster can introduce, say, an amendment that he knows has no chance for passage. And then he can introduce a substitute for that amendment. He now opens a second and a third venue for his filibuster. He starts over.

Verspoon is starting to squirm, perhaps. He knows that the longer the filibuster agaisnt his bill continues, the less time his colleagues will have to get their bills passed before final adjournment. Some of those colleagues start coming around and reminding him of that. Eventually Verspoon has to decide he’s going to withdraw his bill from debate (it’s called putting it on the informal calendar) or he is going to meet with Buster’s people tlo see if a compromise is possible. In the last couple of years, the Missouri Senate Leadership has gone around to the Verspoons of the chamber under these circumstances after just a couple of hours and said, “Look, why don’t you put your bill on the informal calendar and work with Buster to get something that can pass.” The message has some muscle behind it that grows larger as the session time gets shorter. Verspoon can be bull-headed and say no but most often he says yes and Buster is glad to have forced Verspoon to be more open to compromise and the filibuster ends. Sometimes some of Buster’s people are working in the backroom with some of Verspoon’s people while Buster and buddies just keep whiling away the hours on the floor, often hours that the chamber would not be in session anyway (Purgason, for example controlled the Senate floor from about 12:25 p.m. on Tuesday until about 8;50 a.m. on Wednesday. About half of that time was time the Senate was not normally in session.)

If there’s a compromise, the bill comes back and both guys admit they’re unhappy that the bill is not as good as it could be or not as bad as it would be and it gets passed.

But let’s suppose there’s a different motive for Buster. He’s in the minority either in terms of party numbers or political philosophy. He wants to talk the bill to death by forcing the sponsor just to give up. But the sponsor has a tool he can use if he doesn’t want to give up. He can turn to one of the motions that can be made anytime during debate even by someone who does not control the floor. One of those motions is the previous question, the PQ.

Purgason used the ability to inquire of other senators and the ability to start the process all over again by offering amendments. He solicited emails and got about 450 of them, reading many of them on the floor during the filibuster. He had a couple of books that he read and even got colleague Jack Goodman to do some reading for him. Purgason had quite a few helpers to give him some relief during the 20 hours. He was not forcing any one to deal with the clock because special sessions can go on for weeks and this was early.

He finally took off his microphone and walked out of the chamber, ending the delay.

The bill was passed within minutes. The special session ended within hours.

What did he accomplish? No significant changes in the bill. He laid some heavy criticism on his Republican Party for losing its longtime political roots. He talked a lot about the free marketplace.

He did get his name in circulation among his base followers or he expanded the base, judging from the e-mails he read during debate.

He created some memories for those who endured the event.

And he’s achieved bottom drawer status in our Capitol office. We wrote on the top of the first page, “Chuck Purgason and friends debate 7/13-14/2010”

Why did we write that on the first page?

Because the Senate Journal for this filibuster and for all of the other filibusters in other journals mentions nothing about the filibuster. If Purgason had not introduced four amendments late in the proceedings, all of which were ruled out of order, his name would not appear in the journal of the days’ proceedings at all. The only clue in these journals that something like this ever happened is that the clerks record whenever a new Senator becomes the temporary presiding officer. “Senator Griesheimer assumed the chair” reads the first entry in the journal at the beginning of Purgason’s filibuster. “Senator Justus assumed the chair” says the next line. There are a dozen entries like that in the journal. No times are listed showing when they did that. The journal makes no clock references showing when the day began or when it ended.

In the official record there is no sign that Senator Chuck Purgason tied up the Senate for 20 generally mirthless hours and 25 minutes.He went nowhere in stopping passage of the Ford bill. But Mr. Purgason HAS gone to the Missourinet’s bottom drawer.