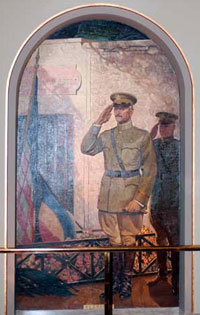 Hundreds of people enter the Missouri Senate every legislative session through the Pershing Gallery. Lobbyists and other meet with Senators in that gallery and in the Bingham Gallery on the other side of the chamber. The galleries are named for famous Missourians whose portraits are in those galleries–World War I Commander John J. Pershing and Nineteenth Century painter and politician George Caleb Bingham.

Pershing’s portrait shows him at Lafayette’s tomb at Picpus Cemetery in Paris on July 4, 1917. Few people look at the portrait and very few realize the portrait includes a second figure central to the story we’re about to tell you. It concerns a little boy in the little north Missouri town of LaClede who became the famous man portrayed at Lafayette’s tomb in Paris. It’s the story of the way a lamb so traumatized the boy that he was unable to make a speech many popular histories say he made that day in Paris.

This is the story of “Lafayette, we are here!”

The United States entered World War I in the Spring of 1917. But it took two months before the first contingent of 200 American soldiers reached France, arriving at St. Nazaire on June 26. The arrival of the Americans was an enormous lift to the French who had been battered by three years of trench warfare with the Germans. French morale was low. The situation was not sustainable.

Those first American troops were far from ready to go to the front lines. Many were new soldiers still needing training and organization. Their symbolic value to the French far exceeded their military value as fighters. Pershing was asked to take his soldiers on a July 4th march through the streets of Paris to boost French morale and to celebrate the American Independence Day.

The Parisians were ecstatic. The open car in which Pershing rode was filled with flowers thrown from the crowd by the time it reached Picpus Cemetery. Members of the crowd dashed into the ranks of soldiers to hug them and give them flowers. 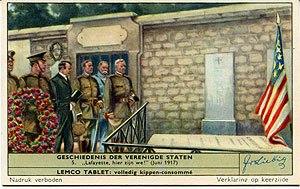 The procession took Pershing and other French and American dignitaries to the tomb of Marie Joseph Yves Roches Gilbert du Motier, the Marquis de Lafayette, who was a 19-year old French military officer who come to the United States to help General Washington fight the British. He returned to France at the end of the war as a wounded hero of the American Revolution. His place in the heart of Americans was the reason President Monroe invited him back in 1825, a visit that brought Lafayette to Missouri as his westernmost stopping point. When Lafayette prepared to go back to France, he had an aide remove several barrels of soil from Bunker Hill in Boston because he wanted to be buried in American soil when he died.

He died in 1834 and the soil of America was spread in his grave. An American Flag was posted at his tomb on the day of his funeral. Every spring, it was replaced and an American Flag remained at Lafayette’s tomb even during the German occupation of Paris during World War II.

That’s why the march through Paris ended there on American Independence Day, 1917.

General Pershing had been asked to deliver appropriate remarks on that occasion. But Pershing did not speak French well and further more was was a poor public speaker to begin with. In fact, he disliked public speaking The reason is rooted in a humiliating experience during his boyhood in Laclede.

Little “Jackie” Pershing was five or six years old when he was supposed to recite “Mary Had a Little Lamb” at a school event. His mother dressed him in his best clothes, including a blue bow tie that he said gave him “a fancy touch” He was the first pupil to perform. But when he went on stage, he froze.

“I was stage struck,” he later wrote, “The words entirely left me. After a dreadful pause, Mother, who sat well up front, came to the rescue, whispering the first line loud enough for me to hear.” His mother nursed him through the performance line by line. “My embarrassment was so painful that the memory left with me was lasting . . . and often to this day when I get up to speak the latent memory of that first experience comes over me with distinctly unpleasant effects,” he wrote many years later. 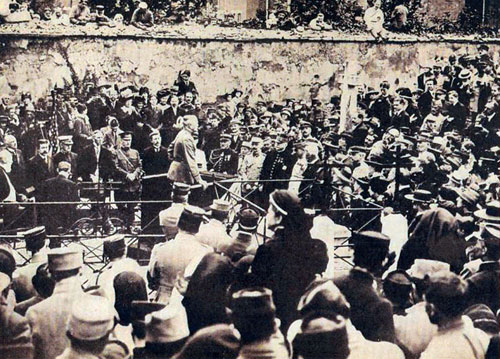 Pershing was so uncomfortable about his own speaking ability, his lack of eloquence when he did speak, and his lack of fluency in French that he asked someone else to deliver the remarks that day. The man he chose was Lt. Col. Charles M. Stanton, the AEF Paymaster who had a gift for speaking, a flair for the dramatic, and was fluent in French. So it was Stanton, not Pershing, who stood before the packed crowd at Picpus Cemetery that July 4th. At the conclusion of his speech, he told the crowd:

“It is with loving pride we drape the colors in tribute of respect to this citizen of your great republic. And here and now in the presence of the illustrious dead we pledge our hearts and our honor in carrying this war to a successful issue”

Then he turned toward the tomb, raised his arm, and dramatically exclaimed, “Lafayette, nous ici!” (Lafayette, we are here!). From that day to this, a ceremony is held at Lafayette’s tomb and a new American Flag is placed there every Fourth of July.

For many years and sometimes today that famous quote has been attributed to Pershing. But he didn’t say it. And that is why people who look closely at that portrait of Pershing in the side gallery of the Senate will see a second figure, standing in Pershing’s shadow. It is Stanton, appropriately place by artist E. L. Blumenschein , in the shadow of the General as he has been in the shadow of history since that Independence Day, 1917 in Paris