The things that come to our newsroom are not always serious government and politics stuff. Take this story that came to us this morning.

Missouri has an entry in a national contest to pick America’s Best Restroom. No, really, there IS such a contest. It’s sponsored by a company that, among other things, deals in restaurant supplies. The winner will be announced in September.

Folks in Branson and those who’ve been to Shoji Tabuchi’s theatre might think that’s Missouri’s entry. But no. Missouri’s entry is the john at The Fountain on Locust, a St. Louis restaurant that claims to be the city’s most photographed restaurant and the city’s best ice cream parlor contest organizers say The Fountain’s relief station is recognized for its hand-painted murals, ornate fixtures, and designer mirrors. 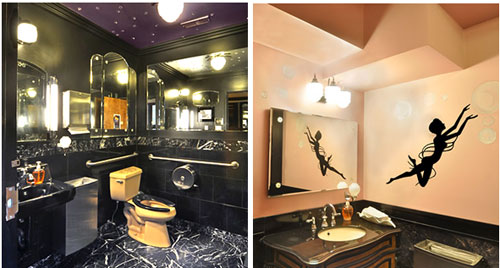 Nice. But it doesn’t have a pool table, as Shoji’s men’s room has. One other thing it doesn’t have–as far as we can tell from the pictures—-is those blasted hot air hand dryers.

One of the other entries kind of amused our sometimes twisted mind that we fear was marred years ago when several of us in the House press gallery used to try to out-pun one another. One of the competitors of The Fountains’ bathroom is the Santa Monica Pier.

People who get paid a lot of money advising news department on the kinds of news they should be reporting say stories about government and politics are too “mundane, boring, and complicated” for the public to care about. We don’t buy that bilge but every now and then as we report on the issues that shape our lives, even we have to take a bathroom break.