We’ve thrown some well-deserved brickbats at state agency spokespeople who think their job is to act as a stone wall between reporters looking for information (see about three previous blogs that mention stone walls) and those who are the most qualified to provide it. Today we want to tell you about a guy who has spent 35 years and two weeks as our intermediary at the Department of Elementary and Secondary Education.

We dropped in on the farewell party this morning for Jim Morris, who began with the department right out of college figuring he would work for the department for a couple of years and then move on, a typical attitude for thousands of fresh college graduates in their first jobs. But Jim learned, as many of those naive college graduates learn, that he rather liked working for that first employer. And now, three decades and four commissioners of education later, he’s decided it’s time to spend more time with the grandchildren (a grandson and a granddaughter), more time on his own clock, and more time doing what he wants to do after he figures out what he wants to do. 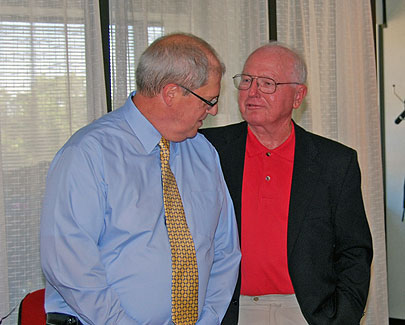 Jim joined the department when Arthur Mallory was at the peak of his dynamic leadership. Mallory drove up from his home in Springfield to be there for Jim’s retirement party today. Mallory’s successor, Bob Bartman, who is now a superintendent in a district near Kansas City, was unable to make it to the event. Bartman’s successor, D. Kent King, died in January, 2009.. Chris NiCastro has brought her experience as a local school administrator to the department with thoughts of reforms. She has been fortunate to have worked with Jim Morris. 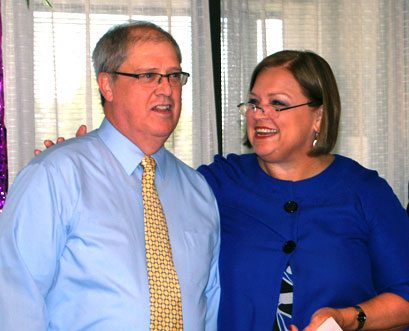 For almost all of the years the Missourinet has been in existence, Jim Morris has been our go-to guy at the education department. He wore the title, “Director of Public Information” with a full understanding of the importance of the word “public.” He wasn’t a “Communications Director,” a title too many wall-builders wear. He was a director of PUBLIC information. He wore that title with class and intelligence, and professionalism. Never once did he give us the line that he was the department spokesman so he would answer our questions. You did hear him on our newscasts from time to time but that was invariably when the expert in the department was out and wouldn’t be back in time for a pressing deadline.

Jim was always courteous, patient, and helpfujl. Most often we’d ask, “Who do I need to talk to about—-,” and Jim would know the person right off the top of his head and more often than not knew that person’s number. Many times he got in touch with the person we needed to talk to and had that person call us.

One of his close associates in the department marveled at Jim’s skills as a writer, something those of us who read government press releases really appreciate. She said she had never seen anyone better at translating legalese and educationese into English than Jim. And she was grateful that Jim was a family-oriented person not only in terms of his wife and his children and now his grand children but in terms of his department family.

He sent a note around to his fellow DESE workers telling them, “It has been my great good fortune to work all these years with so many competent, caring, dependable, hardworking people” who helped him and the department through some tough times (Jim’s a cancer survivor). The folks we talked to said the same thing about him.

He closed his message with, “Let’shope that better times are ahead–soon–for all Missourians. Take care of each other as the Department reinvents itself to deal with today’s and tomorrow’s challenges. Although your work is often thankless, it really is more important than ever. Good luck to all of you in the future. Always live strong.”