Apparently someone near Eldon called the cops Wednesday night. They said there was a broken down spaceship on the side of the road. Can you blame them for thinking that? 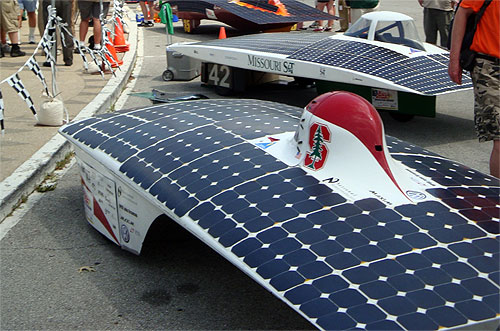 They definitely don’t look like cars. And they do stop running if the clouds come out. So yeah, there’s something a little fishy about them. Here’s some video of Missouri S&T’s entry in the ‘Amercian Solar Challenge Race’ in action:

That’s the ‘Solar Miner VII’  making its way up the hill to the Capitol in Jefferson City, which is an accomplishment. Some of the other solar cars needed to be pushed by team members to reach their parking/photo opp spots on the street in front of the South lawn Tuesday. The team from Germany also had a pretty smooth drive in:

But when the drivers of the 10 teams from around the world were released from their saunas with wheels; they looked a little beat up. Here’s the equation:  a 6 hour drive + a car a few inches of the ground + 95 degree heat + humidity  – wiggle room – air conditioning = a pretty rough day. Regardless, the drivers had bigger smiles on their faces than almost anyone there.  But they probably didn’t mind passing the torch to the next driver, who would head through the hills of Missouri to the next stop in Rolla. Teams start the next leg of 1,100 mile race from there on Thursday. For more information on the race, see our previous coverage, or follow Missouri S&T’s twitter account, or the team’s blog.

Missouri S&T’s Head Mechanical Engineer says it’s unlikely we’ll see pure solar technology in the commercial car industry. Can you imagine trying to ‘re-fuel’ it by yourself? Check out S&T’s team trying to find the right angle to point the solar cells toward the sun for optimal charge:

That’s not the reason we won’t see it, though. Those solar cells are very pricey, and that technology’s not going to fit into ANY carmaker’s line of economy cars too well.  But he does think the designs might show up on the roads; things like the chassis designed for aerodynamics, high-efficiency braking systems, etc. So maybe we’ll all be driving spaceships sometime soon.