Anyone who’s ever dealt with just one middle schooler at a time can imagine how hard it could be to bring hundreds of them to silence for more than an hour. At Lewis and Clark Middle School, the ‘tweens’ dealt with a sobering demonstration of the atrocities of the Holocaust, as the school celebrated the completion of a 13-year-long project.

It’s something most of us will never see: six million of anything in one place. The school started collecting the little aluminum tabs off pop cans when a student suggested the idea in 1997. Teachers passed the project along to other teachers through the years, trying to keep it alive. The teacher who helped see the project to its end said she thought she’d have to give up when she took over; with two million tabs left to go. It just seemed impossible. 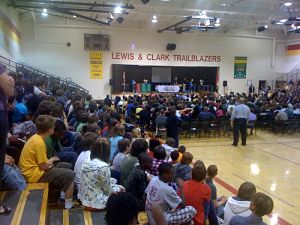 That’s the point, however unintentional. The student who suggested the project in 1997 says he thought at the time they could probably finish it by the end of that school year. The time and effort it took to actually reach the goal demonstrates how massive that number is. So massive, a Curator at the St. Louis Holocaust and Learning Museum says of the many collection projects like these that people start, this is only the second one he’s ever heard of that’s been finished. Most of the kids at the assembly weren’t even born when the project started.

I got to the school about a half hour before the all-school assembly, to take a few pictures and grab a few interviews. I went up on stage to see the barrels; lined up two or three deep in some spots because there were enough of them they could have easily stretched off stage. But the students needed to see them all at once, to see how impossible it was. How could each of those tiny tabs represent a real living, breathing person?

A few weeks before I started work at the Missourinet this spring my wife and I took a whirlwind trip through Europe, and one morning included a short stop at Dachau. It was the first Nazi concentration camp in Germany. I, too, started learning about the Holocaust in middle school. That’s when I, too, read the Diary of Anne Frank. But that three hour stop helped made it real for me – seeing where these people slept, where they worked, where they died. It’s impossible that could have happened.

I had the same feeling standing up on that stage before the assembly. It was the first time I’d ever seen six million of something in one place. It’s a number a person can’t truly comprehend. Not possible.

So these middle schoolers got a rare chance to see what that number means, even if it’s something as arbitrary as a tiny piece of aluminum. That’s probably why teachers didn’t have to walk around shushing students for that hour-long assembly. Their silence was interrupted by gasps during a video showing images from the concentration camps, and for sincere applause for the speakers at the event.

When the students started to get up to leave at the end of the assembly, the students were finally starting to sound like middle schoolers again. But in a really cool moment, three or four of the students grabbed one of the barrels that was maybe a third of the way full, and dumped them onto the floor of the stage. 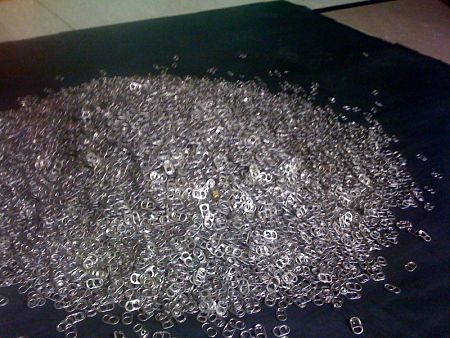 That brought one more hush over the students. It was literally tens of thousands of tabs being dumped out. Like more than a decade of students before them, they’d help collect some of those tabs. It might have taken them months to round up 100 of them by themselves. But even seeing all those barrels full, it still must have been impossible to realize just how many little pieces of metal were in there representing the many mortals who died in the Holocaust.