Partisanship has a place at the Missourinet. But only the right kind of partisanship and only in the right kind of place. And we were pretty blatant about our partisanship a few days ago when we placed a bet with Ashley Byrd, the News Director at the South Carolina Radio Network, for the first round of the NCAA Tournament. The SCRN is one of the five state networks in the Learfield family.

Our Missouri Tigers, we were confident, would whip the tail off her Clemson Tigers even though Missouri was the 10th seed and Clemson was the 7th seed in the tournament.

Not content with insulting us by asserting that her Clemson Tigers were the superior team, Ashley also opined that Missouri’s mascot, Truman the Tiger, needed a thigh-master!

We were justifiably offended that anyone would assert that Truman, one of the nation’s most beloved college mascots, would have any flaws whatsoever. In fact, one of Learfield’s former farm broadcasters WAS Truman the Tiger in his college days and the son of one of our other former farm broadcasters wore the Truman livery with great distinction later. Neither is a thigh master candidate. Well, at least not the second one.

Regardless, we felt it was only appropriate that we offer a counter-review of the Clemson Tiger. We came across the picture you see with this article. YIKES!!!!

First of all, this guy has no fashion sense at all. Who ever heard of a tiger in a t-shirt? A basketball jersey perhaps, but a t-shirt? Give us a break. But it was Missourinet reporter Jessica Machetta who captured the diagnosis.

“Her Tiger looks like it needs an exorcist!” Jessica exclaimed. So we fired that back at Ashley

We exchanged various colorful comments throughout the game until we sent her this note at 4:04 p.m. after OUR Tigers had seized control of the game: “The fat lady has just entered the auditorium in Buffalo. I hear her humming, “Fight Tigers, Fight for Old Mizzou…”

We had bet Ashley and her news staff a great Missouri smoked ham that her Tigers could not be our Tigers.

No ham for our colleagues at the SCRN. And what did we win?

The prizes were an education for us Missouri folks. We didn’t know there were Kosher grits.

Brent Martin arranged the nice tableau (photo below) showing our prizes and showing a different rendition of Our Missouri Tiger. This one certainly does not need a thigh-master. No way.

Thanks, Ashley. We’ll enjoy our loot.

But your Tiger still needs an exorcist. 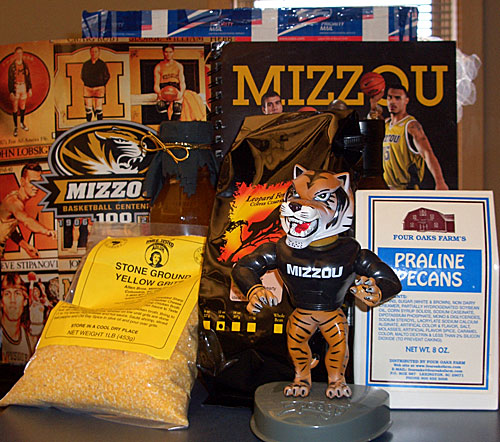 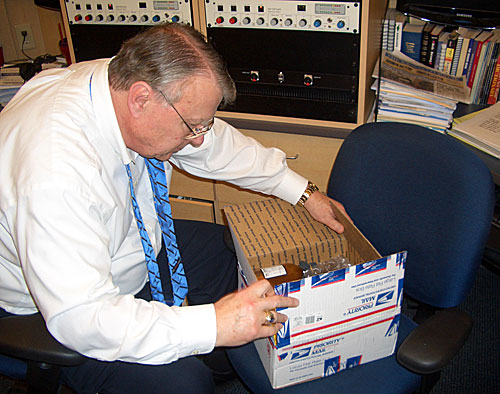