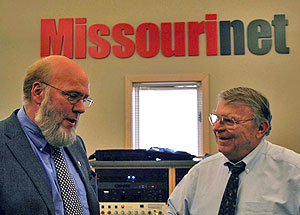 Our friend and former Missourinet reporter James Morris dropped by for a visit last week while he was his national book-signing tour and we spent some time in the studio reminiscing about some of the big things he covered 30 years ago and some of the stories in his new book about Joseph Pulitzer.

One of the things he does in the book that has not been done by previous Pulitzer biographers is dig into Pulitzer’s career in Jefferson City where he served briefly as a State Representative and where he maintained close political ties for some time.

Pulitzer died a century ago, next year. But James has no doubt that Pulitzer would be on the cutting edge of today’s trends in distributing the work of journalists. Here’s our talk with James.