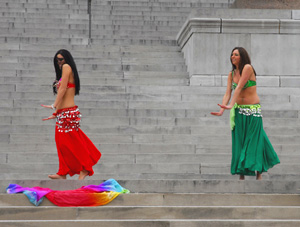 Belly dancers, a rock band, hot dogs on the grill, free hats, cups, key chains and other schwag … one never knows what kind of circus is going on at the Capitol this time of year — whether inside or out on the lawn.

This week’s party was meant to get the message across to people that they need to be counted. Because nothing says “Census” like belly dancers on the Capitol steps.

One thing’s for sure, the road construction crew out front didn’t mind the sideshow, and the partyin’ Census peeps didn’t have a lack of folks stopping by (free food) to ask what was going on (free stuff) or take a moment to peruse the (belly dancers) Census literature.

They’re hoping the partyer’s will wear the hats, use the cups, the key chains, etc., to remind themselves and others to fill out the forms and turn them in.

Does it make sense to spend a bunch of money on refrigerator magnets, plastic piggy banks and other gimmicks when the country is in a recession? It probably boils down to “you gotta spend money to make money.”

Also at issue is the potential loss of a seat in Congress. We run the risk of giving up a seat to a different state with a population increase. Not forgetting that would be one less member of Congress securing funding, it’s also one less voice, and one less vote on the floor Missourians would have.

IF that happened, it begs the question, which seat would be eliminated?

Elliott Stonecipher, a nationally known opinion research consultant, says Louisiana, Iowa, Indiana, Michigan, North and South Carolina, Oregon and Pennsylvania would receive an additional congressional seat if all non citizens — though counted — were not included in the calculations of Congressional reapportionment. Those seats instead will go to states with high non-citizen populations — California, Texas, Illinois and New York. As for Missouri… he predicts we’ll keep our nine seats by a slim margin.

“The census has drifted far from its constitutional roots, and the 2010 enumeration will result in a malapportionment of Congress,” he says.

Census 2000 estimates show about 80 percent of Missourians completed and returned their forms that year … still better than many other areas of the nation.

While there’s a certain number of indigents, illegal residents and those who are just plain apathetic who can’t be counted on to get counted, there’ll be no party to celebrate if we find ourselves represented by one less voice in Congress.