A United States Senate race in Massachusetts has shaken things up in Missouri.

The upset election of Scott Brown gave Missouri Republicans a shot of adrenalin during Lincoln Days in St. Charles. It gave Democrats meeting in Hannibal pause. Politics is funny that way. Two years ago, Democrats rode high after strong wins in the November 2008 elections. Politics, though, is fickle and momentum shifts.

We were able to ask Sen. McCaskill about the impact Sen. Brown’s election might have on policy in Washington and politics in Missouri: AUDIO: 2 min MP3

Whether Brown’s election has an impact in Missouri is debatable. If it does, it most likely will affect the Senate election here.

Secretary of State Robin Carnahan, the leading Democrat in the race to replace Republican Senator Bond, believes the message in Massachusetts might just dovetail into her message on the campaign trail: AUDIO: 2 min MP3

No one really knows what impact, if any, the Scott Brown election will have in Missouri. It sure makes for interesting conversation, though. 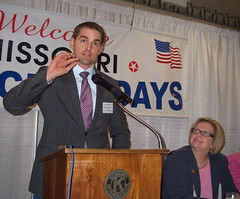 Robin Carnahan’s Senate race was the main feature of the 39th annual Hannibal Days (officially known as Democrat Days in Hannibal). Democrats pushed other candidates as well and a young Democrat taking on an entrenched Republican in Congress received a high profile. Democrat Tommy Sowers of Rolla is challenging the re-election of Republican Jo Ann Emerson of Cape Girardeau. Sowers got a chance to speak at the brunch on Saturday and Sowers understood a key rule of politics when you’re the new kid: keep it short. AUDIO: 3 min MP3

Red meat was thrown to the Democrats on Saturday evening by populist Jim Hightower who spoke on behalf of Carnahan’s senate campaign [PHOTO]. You can enjoy the speech and, for fun, you might listen for Hightower’s mispronunciation of Carnahan’s name. AUDIO: 20 min MP3