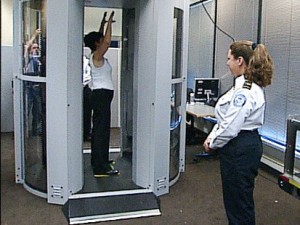 Kansas City International Airport is among the limited number of airports getting a full body scanner, the latest gadget designed to spot people who might be concealing things under their clothes that are not detected by the usual metal detectors. The thing that makes a lot of people a little squeamish about these things is that they really do see what’s under your clothes. And as Sam the Eagle once opined on the Muppet Show many years ago, under our clothes we’re all naked.

One of the blue rubber-gloved TSA people asks you to step into this machine. You are asked to empty your pockets of everything including paper and handkerchiefs. You put your sock feet—remember, you removed your shoes and put them on the conveyor belt—on some green feet outlines on the floor and you hold your hands over your head, palms out. Somebody punches a button and there’s a whir and the scanner moves in a semi-circle in front of you and another one moves in a semicircle behind you.

The TSA person who is tending you then asks you to turn sideways and put your feet on some yellow feet outlines and hold your hands straight out in front of you. Whir. Whir. Then you wait. A few seconds later you can walk out of the enclosure, pad over to the conveyor belt where your luggage, shoes, and other items have piled up, and get your stuff. No, they do not let you see what they see. Nor do they give you pictures of yourself which is one major difference, among many, between an airport full body scan and a colonoscopy

The entire experience was painless.

I don’t know how it was for the person who looked at the images.

So here’s some advice from someone honored by the TSA in our nation’s capital: Don’t be afraid of it. The experience is far worse for the TSA employee who looks at the scans than it is for the person being scanned. It has to be.

At least, it had to be in my case.