Politics is simple. Think of it as you do sports. You have a few participants actually in the game, many supporters on the sidelines and a whole lot of people in the stands cheering and booing. Some watch at home. Another group is indifferent, sometimes even hostile about the games being played. 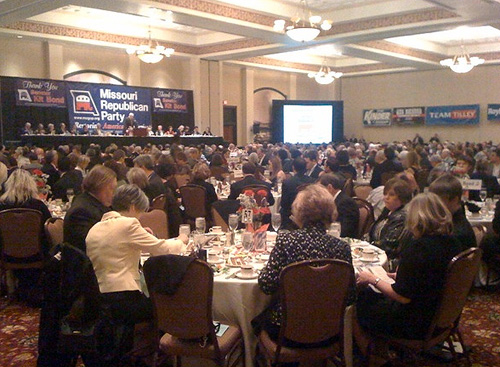 I’m reminded of the similarities as I reflect upon Lincoln Days in St. Charles this past weekend [Photo by Jon Prouty]. A down and deflated Republican Party after the stunning defeats in 2008 has rejuvenated in 2010, because of big wins in Virginia and New Jersey and a huge upset in Massachusetts. A lot of work went into injecting enthusiasm and beefing up the crowds at Missouri’s annual Lincoln Days gathering after a down Lincoln Days a year ago in Kansas City. That work paid off, I’m sure. But Scott Brown’s Republican breakthrough in the United States Senate race in Massachusetts gave Missouri Republicans a shot of optimism they haven’t had in a while.

Missouri Republicans highlighted Congressman Roy Blunt’s Senate campaign throughout the weekend in St. Charles. Nine Republicans have filed to replace Senator Bond, who is retiring. Blunt is, by far, the biggest name among the nine. He has the back of the Missouri Republican establishment as evident with the high profile he received during the Lincoln Days weekend.

There is, though, another name that has drawn some attention. State Senator Chuck Purgason, a Republican from Caulfield, has entered the race. Purgason, who served in the Missouri House before being elected to the Senate, is popular among fellow Republicans in the Capitol and has built a reputation as an uncompromising conservative, which is his calling card in the race against Blunt for the Republican nomination in August.

Blunt, in an interview with the Missourinet, dismissed Purgason’s criticism of his conservative credentials. 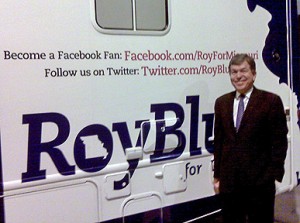 While Blunt drove to Lincoln Days in his campaign bus and received royal treatment throughout the event, Purgason doggedly walked the halls and talked with Republicans, carrying his campaign into what he told us was mixed reactions among the faithful gathered at Lincoln Days.

We asked Purgason if he thought he was the fly in the ointment.

Purgason said he would keep campaigning even if the Missouri Republican Party has already made its choice.

He might be a new name on the ballot, but Ed Martin certainly isn’t new to politics. Martin has been a player in St. Louis Republican circles for years prior to becoming Chief of Staff for Governor Blunt. This is the first time he has placed his name on the ballot. He has taken on a tough task: unseating Democratic incumbent Congressman Russ Carnahan, who won a congested Democratic primary in 2004 to replace Richard Gerphardt when he retired. [Martin greeting supporters in photo below] 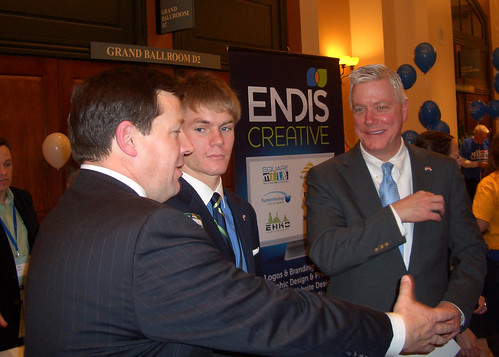 In one of those moments of serendipity that happens on occasion, Martin was filing for Congress at the Secretary of State’s office on the same day that lawyer Scott Eckersley was testifying before a House committee at the Capitol on improvements to the Sunshine Law. Eckersley worked for Martin in Governor Blunt’s office and was fired after raising questions about whether the Blunt Administration complied with the Sunshine Law in its handling for e-mail correspondence. Martin fired Eckersley, claiming poor work performance. Eckersley claimed it was in retaliation for the questions he raised. 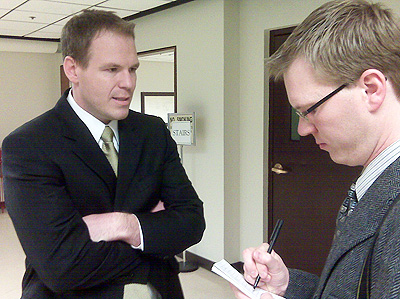 During an interview with Eckersley (left in photo above) after his testimony before the House committee, we asked Eckersley about his opinion of Martin filing for office.

At Lincoln Days, we asked Martin if he would like to respond to Eckersley’s statement. He declined.