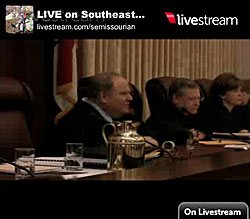 The Missourinet has been involved in this business of opening state government to its citizens for more than thirty years. Before then, in fact. This reporter testified before Senate committee when Senator Bill Cason of Clinton introduced the bill that became Chapter 610 in our statutes, the open meetings/open records law. He testified against the bill because it did not include a provision allowing journalists to use all of the tools of their trade in covering meetings that the law guaranteed would be open (this was about the time he was thrown out of a Lincoln University Board of Curators meeting when he refused to shut off his tape recorder). A couple of years later the Missourinet went on the air and reporters for the first time started putting microphones on witness tables at committee hearings and recording floor debate in the House, playing excerpts back on our newscasts. In 1975, Missourians began hearing for the first time their fellow citizens testifying on legislative proposals and began hearing their representatives debating bills. The Senate did not allow recording of debate for several more years.

More than ten years ago the Missourinet began providing gavel-to-gavel internet broadcasts of House and Senate debate. We were amazed at some of the reactions we got and by some of the places it came from. One lawmaker’s wife, in fact, told us she listened in so she knew where her husband was.

As early as 1977 the Missourinet started pressing the Supreme Court to open itself up to broadcast coverage and still photography. Not until Chip Robertson became Chief Justice more than twenty years later, however, were rules written allowing that broadcast coverage in all state courts. A few years later the Missourinet began feeding the court’s arguments on the internet.

Today the legislature provides its own internet feeds of floor debate. The State Supreme Court has assumed responsibility for the audio webcasts of its arguments.

We haven’t gone through this history because we wanted to beat our chests or pat ourselves on the backs. We’ve done this because it’s important to know that the government openness we take for granted today has been a long process that is ongoing—as in today’s live webcast of the Supreme Court hearing.

About 15 years ago the Missourinet proposed creation of The Missouri Channel and although we told the Missouri cable television industry we could create it and provide it to cable operators for a daily cost per subscriber of less than the price of a large bag of M&Ms with peanuts, the industry showed little enthusiasm. Now we have the internet. Now we have the affordable technology and the affordable delivery systems to create The Missouri Channel without using cable. Now it doesn’t have to be broadcasters who provide broadcasts. Newspapers, radio, and television are all growing together as content providers for the people. Our opportunities to serve the public are greater than they ever have been thanks to today’s technology. The Southeast Missourian today and Steve’s committee webcasts in the last few weeks underscore those opportunities. We hope the Missourinet and other news media will seize those opportunities and commit the resources to meet the obligations those opportunities give us.

And we hope that the people we try to serve through them will care enough to want to pay attention and to learn.